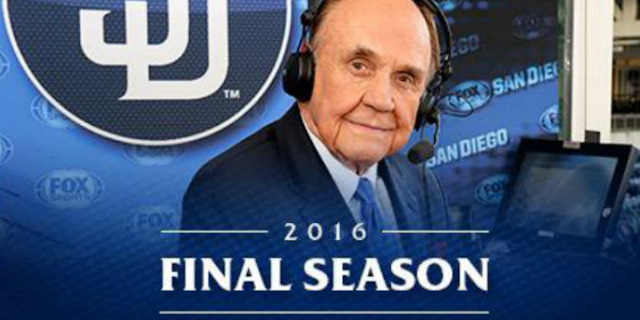 MLB Padres televison broadcaster Dick Enberg announced during the on-air telecast of Wednesday night's game against the Giants that he will retire following the 2016 season as the primary play-by-play television host for Fox Sports San Diego.

"In culminating 60 years of sports broadcasting, it has been a tremendous thrill to be the TV voice of my hometown San Diego Padres, and I'm tremendously excited that I will have a continuing TV role though the 2016 season, an All-Star Game year for San Diego," Enberg said in a press release.

Enberg has been the play-by-play announcer for San Diego for six seasons. He was honored by baseball's Hall of Fame in July with the Ford C. Frick Award for broadcast excellence.

"Inarguably, Dick is the greatest storyteller the sports world has ever known, and we have been fortunate to have heard his legendary voice and signature calls on our Padres telecasts since 2010," said Padres team president and CEO Mike Dee in a press release.

Enberg began his full-time broadcasting career in 1965 in Los Angeles as the radio and television voice of the California Angels, UCLA basketball and the Los Angeles Rams.

Before joining the Padres, Enberg worked with CBS Sports for 11 years as the play-by-play voice for the network's coverage of the NFL, college basketball and U.S. Open tennis championship. He spent 25 years with NBC Sports prior to joining CBS.

Enberg is one of only two people to have been honored by the baseball, football (Rozelle Award) and basketball (Gowdy Award) Halls of Fame.
Posted 3:02:00 AM