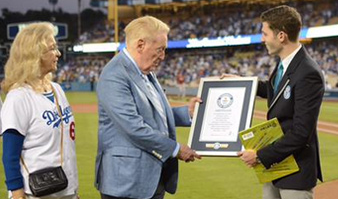 Baseball broadcasting HOFer Vin Scully has been officially recognized by Guinnes World Records for having the Longest career as a sports broadcaster for a single team, having been behind the mic for an incredible 65 years 5 months and 22 days (as of 23 September).

Known for his distinctive lyrical yet simple play-by-play descriptions, the legend has been announcing the Los Angeles Dodgers games since 1 April 1950 when the team were based in New York as the Brooklyn Dodgers.

Before Wednesday’s game between the Dodgers and the Arizona Diamondbacks kicked off, Guinness World Records adjudicator Alex Angert entered the stadium and presented the long-serving broadcaster with a certificate.


Angert said: “I’m honored to be able to present legendary broadcaster Vin Scully with his official certificate. Vin is a national treasure and it’s unbelievable to think that his career as the Dodgers’ broadcaster predates Guinness World Records, which just celebrated its 60th anniversary in August.

“His voice has called some of baseball’s most timeless record-breaking moments and the world has been lucky to have him behind the microphone for the last seven decades. Vin’s career has been ‘Officially Amazing’ and we are glad to welcome him into the Guinness World Records family.”

Vin Scully’s career was only just beginning when 62 years ago he became the Youngest sports broadcaster to broadcast a World Series game (baseball). Aged 25, he voiced the broadcast of the 1953 World Series game between the Brooklyn Dodgers and the New York Yankees.
Posted 3:03:00 AM