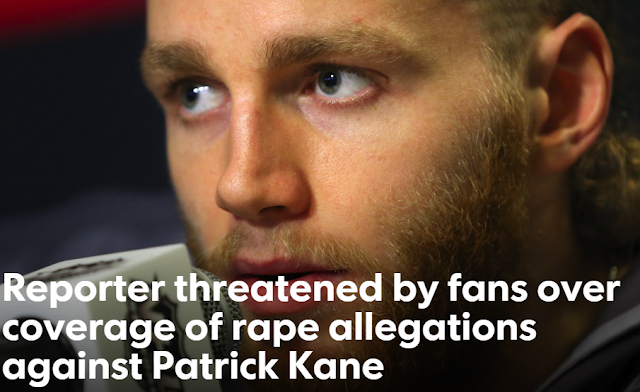 Mean tweets and trolling haters often come with the territory for journalists covering high profile news, and we all know Chicago Blackhawks fans have ferocious love for their team, but one Chicago reporter following the Patrick Kane investigation was kept from work Friday after she was threatened on Twitter.

Julie DiCaro, an anchor and contributor to WSCR 670 AM The Score, didn't go to work Friday because of threats she received on Twitter in response to her coverage of the rape accusations against Blackhawks superstar Patrick Kane.


Also, no "authorities" told me not to go to work. I don't know where people are coming up with this stuff. Family decision.
— Julie DiCaro (@JulieDiCaro) September 25, 2015


The threats, according to DiCaro’s Twitter account involved specifics about her whereabouts, enough that authorities deemed it unsafe for her to go to work. According to USAToday, a look at the rest of DiCaro’s Twitter account and work shows a detailed and balanced account of the accusations against Kane, the developments involving the accuser’s mother’s allegations about the rape kit and press conferences relating to the case.