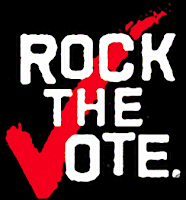 Rock the Vote, the largest non-profit and non-partisan organization in the United States driving the youth vote to the polls, has announced a partnership with iHeartMedia dedicated to increasing youth registration and turnout for the 2016 presidential election.

The new partnership was revealed during the first night of the annual iHeartRadio Music Festival at Las Vegas' MGM Grand Arena by Ryan Seacrest, who hosts and produces his market-topping Los Angeles morning drive show ‘On Air with Ryan Seacrest’ for iHeartMedia's 102.7 KIIS-FM.

12,000 Americans are turning 18 every day and Millennials will total over 93 million next year, with the potential to comprise a decisive bloc of up to 40 per cent of the voting electorate. The partnership will leverage iHeartMedia's 850 radio stations and industry-leading iHeartRadio digital platform to share stories from iHeartRadio artists, on-air personalities and listeners about the importance of voting and provide local information about voter registration deadlines and poll location information. Over the next 14 months, iHeartMedia and Rock the Vote will closely cover all aspects of the election process and offer unique opportunities for listeners to get involved.

"We want iHeartMedia to be a driving force during this cycle, not only in helping to spur new voter registrations but in supporting existing voter engagement, and our primary goal for 2016 is a surge in turnout on Election Day," said chairman and CEO of iHeartMedia Inc. Bob Pittman.

"iHeartMedia provides true national reach and is made up of a number of diverse communities, just like America, across every format -- from Top 40, hip-hop and country to classic rock, Spanish and news talk -- and with Rock the Vote we will host conversations with voters to explore issues important to them."

Ashley Spillane, who has served as president of Rock the Vote since February 2014, underscored the historic opportunity this partnership represents.

"It is incredibly exciting for me personally to be working with John and Bob on this important partnership. It was MTV and Rock the Vote's partnership and the iconic PSAs they created in the '90s that helped spark my interest in politics," Spillane recalled. "I am excited for this new partnership, inspired by the passion that founded both MTV and Rock The Vote, to do the same for millions of young voters across the country."

iHeartMedia and Rock the Vote's 14-month campaign, entitled 'Voting is the Party' officially launches on-air this Tuesday in conjunction with National Voter Registration Day. The premise of the campaign is to encourage a new generation of voters to join the political process and stresses that it is not about which party you're with. In America, voting is the party.
Posted 3:20:00 AM