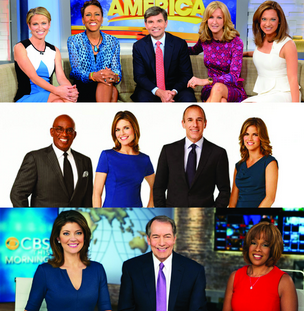 For the third straight season, ABC’s Good Morning America has been the most-watched morning show in viewers and the A25-54 demo. The last time GMA won 3 seasons in a row in viewers was 20 years ago. TV Newser reports it’s been even longer since GMA led in the demo 3 seasons straight.

CBS This Morning continues to show the most growth in the mornings.

Last week, it was the only network morning news program to post year-to-year gains this week among viewers (+15%, 3.34m from 2.91m) compared to a year ago.  CBS This Morning gained +430,000 viewers compared to the same week last year and closed the viewership gap with the Today Show by half a million viewers, and cut the deficit with GMA by 880,000 viewers according to Nielsen live plus same day ratings for the week ending Sept. 18. The show is now in the closest competitive position with NBC’s Today since the 1993-1994 season.