A Springfield, MO station should make one of its hosts publicly apologize for his on-air speculation that the slayings of two Virginia journalists on live television was a hoax, according to the Program Director of two slain joursnalistss.

Bell noted in his email that Rex Hansen, station manager for KTTS and other local stations owned by the E.W. Scripps Company, issued an on-air apology calling the comments disrespectful, not factual and “downright wrong.”

“But has Joe Rios gone on the air and apologized and set the record straight? Otherwise has the record really been set straight?” Bell asked in the email. “I think your station has a moral obligation to answer each post on your Facebook pages and Joe’s page with the truth and to challenge all hoaxers. Otherwise you are allowing my two friends’ memories to be tarnished.”

Rios remarks were made were made during the Aug. 30 episode of “Cracker Barrel” — four days after reporter Alison Parker and cameraman Adam Ward from WDBJ7 were shot by a former co-worker on live television.

Rios’ call screener, Rick Kennedy, who goes by the on-air name Rick Masters, also speculated that the shooting was a hoax. Both men were suspended by the station.

Kennedy told the News-Leader last week he quit, that he stands by his views the shooting was a hoax, possibly to drum up support for stronger gun laws, and that he believes he was unfairly punished for expressing his opinion. 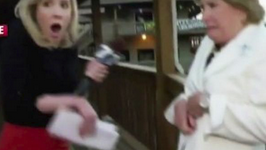 “I only wish it was a hoax since then maybe I could stop having nightmares, so I wouldn’t have had to tell Alison’s father that she was dead and he should not go to the site, and I would not have to put up with these unfeeling, idiotic, and warped hoax theories,” Bell wrote in the email.
Posted 2:36:00 PM