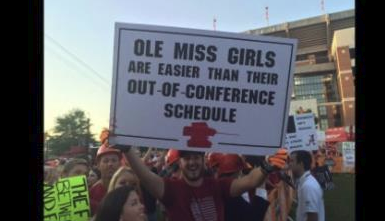 ESPN is drawing criticism for a fan picture on its social media accounts that some say is sexist.

The picture, taken outside the University of Alabama's Bryant-Denny Stadium on Saturday, shows a Crimson Tide fan holding a sign directed at opponents University of Mississippi.

"Ole Miss Girls Are Easier Than Their Out-Of-Conference Schedule," reads the sign, a reference to the first two games on the Rebels' schedule. They scored 76 and 73 points in those games.

CNN reports anchor Rece Davis and analyst Kirk Herbstreit rebuked the image as it flashed on the screen during the broadcast among other fan zone shots.

"I can't condone that type of behavior," Davis said.

"That is unacceptable," Herbstreit said.