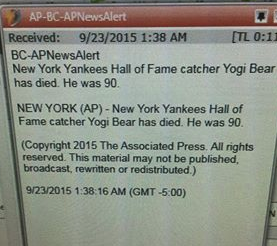 The Hall of Famer passed Tuesday night of natural causes.

Berra, one of the most beloved figures in baseball history, was an 18-time All-Star, and 13-time World Series champion that played all but four of his 2,120 career games for the Yankees. He was also a a three-time MVP, and managed both the Yankees and New York Mets.


We are deeply saddened by the loss of a Yankees legend and American hero, Yogi Berra. pic.twitter.com/Bf8uXxUPzR
— New York Yankees (@Yankees) September 23, 2015