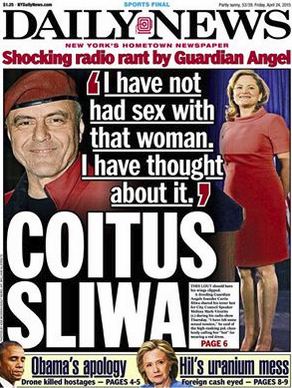 The NY Daily News is reporting a 'slobbering' Curtis Sliwa went from rude to raunchy Thursday when he exposed his lurid thoughts onn-air about NY City Council Speaker Melissa Mark-Viverito.

Sliwa, 61, speaking on his “Curtis & Kuby” radio show Thursday, recalled how “drop-dead gorgeous she looked in the red dress” Mark-Viverito, 46, wore at the State of the City speech in February.

He also insinuated that the feeling was mutual and knocked Mark-Viverito (who is single) for wearing "plain" clothes that didn’t do justice to her “stunning” appearance.

“I had an attraction to her, and I have felt some sexual tension when I have been in her presence,” the twice-divorced Sliwa told co-host Ron Kuby.

“I have not had sex with that woman,” said Sliwa. “I have thought about it. But I have never, never engaged her.”

He did claim to have had sex with other members of the City Council.

“Three so far,” he boasted.