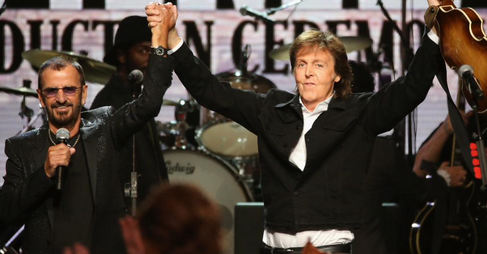 The 30th annual Rock and Roll Hall of Fame Induction Ceremony was at Cleveland's Public Hall Saturday night — it provided for hours of endless entertainment and musical talent capped off with a reunion performance by Paul McCartney and Ringo Starr, acording to Fox8.

Joan Jett and the Blackhearts opened the night with “Bad Reputation.” Throughout her performance, Jett invited musicians like Dave Grohl, Miley Cyrus and Tommy James on stage to sing songs like “Crimson and Clover” and Cherry Bomb.”

Inductee Green Day had everyone out of their seats during “American Idiot,” “When I Come Around,” and “Basketcase.”

One of the highlights of the night was the induction of Bill Withers by Stevie Wonder. Withers cracked joke after joke, pointing out that he didn’t have to use the teleprompter if he didn’t want to.

Wonder chimed in saying, “I didn’t use the teleprompter either,” eliciting roars from the crowd.  Withers said he was grateful to be inducted by the legend.

“The bottom line is, Stevie Wonder knows my name,” he said. “And the brotha just put me in the Hall of Fame.”

And one of the biggest moments of the night came near the very end. Paul McCartney took to the stage to induct Ringo Starr.

After Starr was inducted, he performed “Boys” first with Green Day and then sang alongside Joe Walsh. He even hugged fans in between sets — before a reunion performance with Paul McCartney. They sang songs like “With A Little Help From My Friends,” and were joined by all the musicians present at the ceremony.