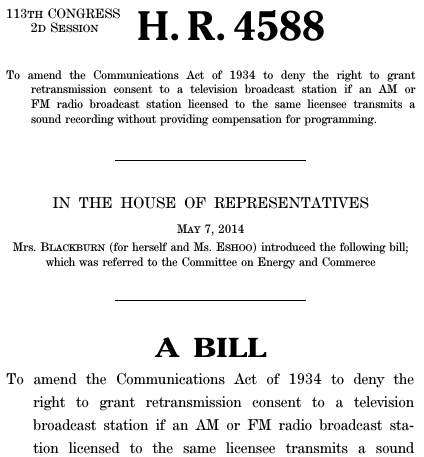 Reps. Marsha Blackburn (R-Tenn.) and Anna Eshoo (D-Calif.) have reintroduced the Protecting the Rights of Musicians Act, a bill that is now a one-two punch aimed at broadcasters, according to Broadcasting&Cable.

The bill would stipulate that owners of both TV and radio stations could not seek retrans payments for their TV stations unless those co-owned radio stations paid a performance fee for music airplay.

The National Association of Broadcasters has been fighting congressional efforts, backed by record labels and artists, to legislate a performance royalty payment. Blackburn, who counts Nashville musicians among her constituents, has been a leading proponent of the payments and of legislation.

Broadcasters argue they already compensate artists through airplay that drives sales of their songs.

The second blow to broadcaster interests is an add-on to the bill that would prohibit the FCC from mandating radio chips in mobile devices. Broadcasters have been pushing for making those mobile devices broadcast receivers as well, given that many already have the chip but don't have it activated.

“Broadcasters have repeatedly told us that retransmission consent payments are fair because cable and satellite stations make millions by retransmitting local broadcast content. However, when it comes to music, the same broadcasters, many who own both TV and radio stations, sing a completely different tune,” Blackburn said. “Our legislation seeks to modernize outdated law and put an end to a loophole that allows AM/FM radio to avoid paying musicians for their creative work."