Turner’s last day is yet to be determined. Kelley is expected to be
hosting DBO’s Morning and Afternoon News on a fill-in basis as needed until Jim Turner’s final broadcast.

Turner started at WDBO in May 1972, originally for afternoons. After 12-years in PM Drive, Turner switched to the morning show. 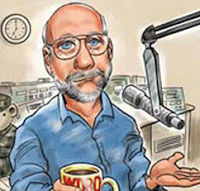 WDBO PD Drew Anderssen commented on the Turner’s retirement:  “Jim is a broadcast icon. He has been revered as one of the premier morning hosts in America for many years, a true professional, and a great man. We stand by Jim in celebration of his 40 years of community service and dedication to Central Florida as he begins to write a new page in his life. He will truly be missed as the daily voice of morning news in Orlando radio.”

“Jim has been WDBO’s anchor to our listeners and community,” added VP/Market Manager Susan Larkin.  “His talent, engagement, and sheer love of radio is to be admired. We will miss Jim and cannot thank him enough for his part in building this brand.”