In Changing News Landscape, Even TV is Vulnerable

The transformation of the nation’s news landscape has already taken a heavy toll on print news sources, particularly print newspapers. But there are now signs that television news – which so far has held onto its audience through the rise of the internet – also is increasingly vulnerable, as it may be losing its hold on the next generation of news consumers. 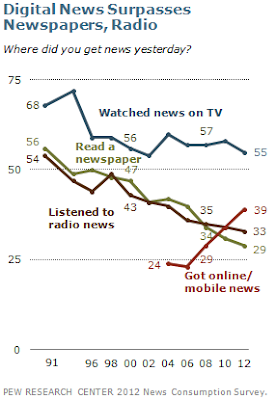 Online and digital news consumption, meanwhile, continues to increase, with many more people now getting news on cell phones, tablets or other mobile platforms. And perhaps the most dramatic change in the news environment has been the rise of social networking sites. The percentage of Americans saying they saw news or news headlines on a social networking site yesterday has doubled – from 9% to 19% – since 2010. Among adults younger than age 30, as many saw news on a social networking site the previous day (33%) as saw any television news (34%), with just 13% having read a newspaper either in print or digital form.

These are among the principal findings of the ’s biennial news consumption survey, which has tracked patterns in news use for nearly two decades. The latest survey was conducted May 9-June 3, 2012, among 3,003 adults.

The proportion of Americans who read news on a printed page – in newspapers and magazines – continues to decline, even as online readership has offset some of these losses. Just 23% say they read a print newspaper yesterday, down only slightly since 2010 (26%), but off by about half since 2000 (47%).

The decline of print on paper spans beyond just newspapers. The proportion reading a magazine in print yesterday has declined over the same period (26% in 2000, 18% today). And as email, text messaging and social networking become dominant forms of communication, the percentage saying they wrote or received a personal letter the previous day also has fallen, from 20% in 2006 to 12% currently. There has been no decrease in recent years in the percentage reading a book on a typical day, but a growing share is now reading through an electronic or audio device. 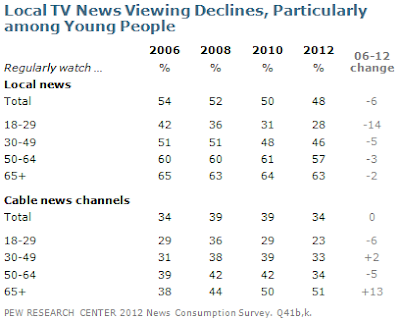