UPDATE Tuesday 8:30a:  Facebook now says that advertisements for  Mike Gallagher’s latest book were denied “in error” and are now live on the social networking site, though did not provide details about why the ads were initially refused. 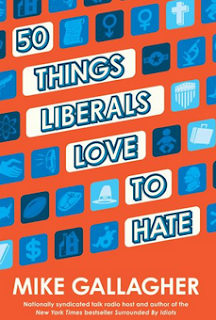 Conservative radio talker Mike Gallagher says Facebook refused to sell advertising space for his new book because the title “50 Things Liberals Love to Hate” contains the word “hate,”  according to a story at TheBlaze.com.

“I found out yesterday that Facebook rejected an ad for my book,” Gallagher said on Fox News. “My publisher Simon & Schuster and I were going to put banner ads on Facebook, and Facebook literally told the publisher, ‘we won’t accept the ad because it has the word hate in the title.’”

Gallagher said his publisher asked the social media giant whether having the word “hate” would disqualify any book for advertisement, such as one titled, “I hate broccoli.”

“Then Facebook conceded, ‘well we’ve gotten some complaints from people who don‘t like the title of Mike Gallagher’s new book,” Gallagher said.

Referring to Facebook as a “machine,“ Gallagher said the site ”allows pedophiles to troll the Internet“ and has ”defended perverts and stalkers” He subsequently posted a link on his Facebook page to a New York Post article from August about the site’s refusal to remove a “Pedophiles are people too” page.

“Free speech?” Gallagher said on Fox. “I don’t think so. … They don’t like a conservative buying time, they won’t take my money, it’s unbelievable.”