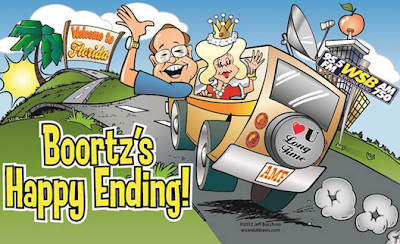 Rodney Ho at ajc.com is reporting a bash for “The Talkmaster” Neil Boortz is set for Jan. 12, about a week before his official departure from four decades of radio shows. It will feature comedian Jeff Foxworthy and guests Herman Cain, who will replace Boortz in January; his buddy and syndicated talk show host Sean Hannity; WSB talk show host Erick Erickson, also editor of Redstate.com, and consumer advocate Clark Howard. The band Banks and Shane, one of Boortz’s favorite acts and good friends, will perform.

Belinda Skelton, Boortz’s longtime producer, said there will be surprise guests as well. “We were working on this before his retirement announcement was made in June, How many times does a larger-than-life person like Neal retire like this?”

Farewell events also are planned in Tulsa, Okla., Jacksonville, Orlando and Dayton, Ohio, cities where Boortz’s syndicated show has been on the air since the early years of syndication in the 1990s.