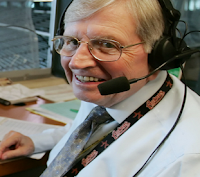 He was a professional to the end, thanking the fans and the sponsors while trying to keep his emotions in check.

MLB.com is reporting Milo Hamilton's last game as the Astros' full-time radio play-by-play announcer resulted in a win, which was the one thing he wanted more than anything else.

Hamilton, who is stepping aside after 28 years calling Astros games and nearly 60 years announcing Major League games, was behind the microphone for all nine innings of the Astros' 2-0 win over the Cardinals at Minute Maid Park on Wednesday night, and exhibited the kind of passion fans have come to expect in his swan song.

"Whoa, baby, put a blue star all over that!" Hamilton said when the Astros turned a 6-4-3 double play in the ninth.

And when Allen Craig grounded out to Jose Altuve for the last out of the game -- and the final out of Hamilton's career -- the excitement was still there at age 85.

"Astros win the final game at home!" he said.

As fireworks shot off beyond the outfield and team president and CEO George Postolos popped the cork on a bottle of champagne in the radio booth, an era in Houston baseball came to a close.

"Whether it's next year or five years from now or 10 years, we hope to have you back in this booth because this will always be your booth," broadcast partner Brett Dolan said on-air. "Thanks for the memories, and don't be a stranger."

Hamilton, 85, announced in February that this season would be his last behind the microphone for the Astros. He has been in broadcasting for 67 years, including Major League stops in St. Louis, Chicago, Atlanta, Pittsburgh and Houston.