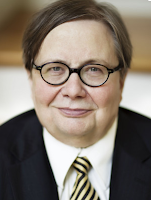 TV Critic Tom Shales has harsh words for what he considers to be GMA's opportunistic handling of Roberts' battle with myelodysplastic syndrome (MDS), or preleukemia, for which she recently underwent a bone marrow transplant with her sister acting as donor.

"Now we come to Something That Must Be Said," Shales writes. "It may have been said elsewhere already, but just in case, here goes: ABC has managed to turn the very serious illness of co-anchor Roberts into a huge promotional opportunity for GMA."

"On every edition of GMA, there are shout-outs, warm wishes and detailed reports pertaining to Roberts' condition," he says. "She has been seen in remotes from the hospital, and the sympathetic outpourings of viewers have been heavily documented."

The ratings have been strong since Roberts' departure: GMA has been Number One in the adults 25-54 demo since she began her medical leave on Aug. 31, and have been steadily gaining total viewers.