In 1933…The daytime radio drama "Ma Perkins" debuted on WLW in Cincinnati. Later the show moved to WMAQ in Chicago and by December 1933 it was heard nationally over the NBC Red network. Virginia Payne played the title role and never missed a performance during 27 years and 7,065 episodes. 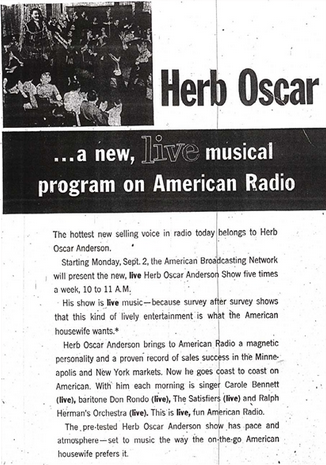 In 1957...ABC radio announced an experiment with a “live” music show hosted by Herb Oscar Anderson. The show would be in sharp contrast to DJ shows and recorded music.

In 1962...It was announced that starting in September, sportscaster Tom Harmon will be heard on ABC radio where he will have a 10-minute weekday sports broadcast and he’ll also be heard on weekends in eight five-minute broadcasts. He joins ABC after 13 years with CBS’ Pacific radio network.

Once a member of the Los Angeles Rams, Tom Harmon was one of the first athletes to go into broadcasting. He was an All-American football player in 1940 at the University of Michigan.

One of Tom’s daughters would marry Ricky Nelson and, later, son Mark would become a well-known actor. He currently stars in NCIS on CBS-TV.


In 1962...Disc Jockey Bob Crane of KNX, Los Angeles is signed to star in “Send Me No Flowers” by the Laguna Beach (Calif) SummerTheate


In 1973...In the past six years, FM radio listeners have increased by 152%, according to Arbriton and a statistic that should give AM music stations some pause. The study covered 8 of the top-10 markets.


In 1973...Philadelphia adds its third FM rock station as WYSP 94.1 FM joins the frey behind WIFI 92.5 FM and WMMR 93.3 FM. WYSP (Your Station in Philadelphia) jocks included Tom Straw, Dean Clark, and Doug Cristian with Frank X. Feller as program director. The music included popular cuts from albums by artists such as Jimi Hendrix, Chicago, and Crosby Stills and Nash. 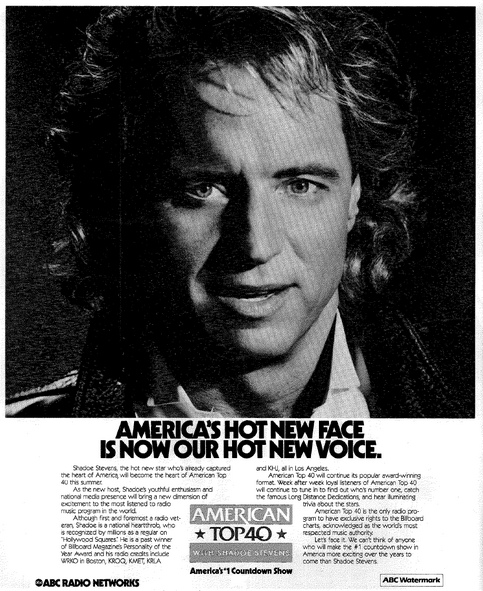 Casey Kasem left the show over contract concerns with ABC. Industry trade paper Billboard magazine reported that the main disputes between Kasem and Watermark/ABC were over his salary, because of declining ratings and a smaller group of stations airing the show. Casey's final AT40 show aired on August 6, 1988. At no point during that final show did Kasem ever let on that any changes were afoot, and simply omitted the phrase "join me next week" while closing the show.

Kasem was replaced by Shadoe Stevens, whose first American Top 40 show aired on August 13, 1988, on 1,014 stations.  Kasem joined the Westwood One radio network less than a year later to start a rival show, Casey's Top 40. Many AT40 listeners were upset by Kasem's departure and, as a result, many stations dropped American Top 40 in favor of Casey's Top 40 once it hit the airwaves on January 21, 1989. 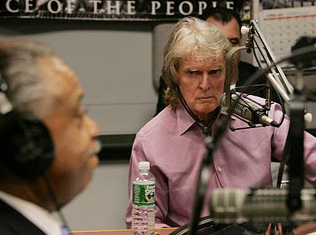 In 2007...CBS settles its termination dispute with Don Imus who was fired in April after referring to a mostly black university women’s basketball team as “nanny-headed hos.”


In 2007...Ryan Seacrest is tapped to host the 59th annual Emmy Awards. “I’ve covered the Emmys before from many different angles and I’m thrilled, honored and excited to be hosting it this year. With my schedule, there’s always that final check to make sure I could do it all, but with the Emmy’s you make the time.”


In 2012…Actress Rosemary Rice died after a heart attack at 87. She provided the voice of Betty Cooper on the Archie Andrews radio series, played the oldest daughter and narrated the early 1950s TV series, "Mama," appeared on Broadway, recorded 15 children's albums, and earned three Clio Awards for her work in television commercials – on camera and as a voiceover artist. For Clairol, she became the familiar voice of the ad slogan, "If I've only one life to live, let me live it as a blonde."
Posted 2:59:00 AM