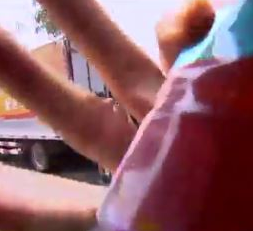 Reporters covering that series of explosions and raging fire at a port in Tianjin, China Wednesday are having a hard time doing their jobs.

It’s not only because of the widespread, hard-to-get-to damage, but because Chinese authorities are intervening in their reporting.

Doane was outside a hospital when censors tried to prevent him from reporting.


Doane describes how officials are controlling the flow of information after dozens were killed in the blasts at a toxic chemical and gas warehouse.