Wake-Up Confidential: Biden Has a Plan

BIDEN UNVEILS $1.9 TRILLION 'AMERICAN RESCUE PLAN' FOR TACKLING CORONAVIRUS, ECONOMIC FALLOUT: President-elect Joe Biden unveiled a $1.9 trillion legislative proposal last night  for tackling the coronavirus and the economic fallout from the pandemic, which includes getting people vaccinated faster and providing financial assistance. What Biden is calling the "American Rescue Plan" would work to reach his goal of administering 100 million vaccines by the 100th day of his administration, as well as send out a check for $1,400 to most Americans in the addition to the $600 they just recently got for a total of $2,000. It would also extend an increase in unemployment benefits and the suspension of evictions and foreclosures through September.

President-elect Joe Biden says he will make his first appearance before a joint session of congress next month to outline his "build back better" recovery plan.

Mr. Biden says his "American rescue plan" will "get direct financial assistance and relief" to those who need it most. pic.twitter.com/dPUWhNUCVe

Additionally, it would increase the minimum wage to $15 an hour, expand paid leave and increase tax credits for families with children. Speaking in a nationwide address, Biden said, "The crisis of deep human suffering is in plain sight, and there’s not time to waste. We have to act and we have to act now." He also called the vaccine rollout, quote, "a dismal failure so far." The proposal's prospects remain unclear in the new Congress, where Democrats have the majority in both chambers, but by narrow margins.


➤WRAY: FBI TRACKING 'EXTENSIVE AMOUNT OF CONCERNING ONLINE CHATTER': FBI Director Chris Wray said yesterday that they are tracking a, quote, "extensive amount of concerning online chatter," including calls for armed protests leading up to next Wednesday's presidential inauguration, in his first public appearance since last week's attack on the Capitol. Wray said that the FBI remains concerned about the potential for violence at protests in Washington, D.C., and in the nation's state capitols. However, he said the FBI will have a 24-7 command post at their headquarters and at each of its 56 field offices, stating, "Our posture is aggressive, and it’s going to stay that way through the inauguration." In addressing last week's Capitol assault, Wray said the FBI has so far identified over 200 suspects, saying, "We know who you are. If you’re out there, an FBI agent is coming to find you."

Meanwhile, the Washington Post reported yesterday that dozens of people on a terrorist watch list were in Washington, D.C., last Wednesday for the pro-President Trump events that took place before the attack on the Capitol, citing sources familiar with evidence the FBI has gathered. Most of them are suspected white supremacists. People on the Terrorist Screening Database, who are flagged as potential security risks, aren't automatically barred from flying or from any public or commercial places. However, the Post cited current and former law enforcement officials as saying that the presence of so many people on the Terrorist Screening Database in one place without stronger security measures in place is another example of intelligence failures before last week's attack. 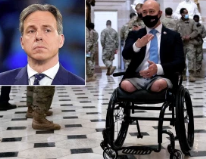 questioning a Republican congressman and combat veteran’s commitment to democracy, said Thursday the criticism is an attempt to change the subject from the attack on the U.S. Capitol. During coverage of Wednesday’s House vote to impeach President Donald Trump, Tapper referenced U.S. Rep. Brian Mast of Florida, who was among Republicans who voted last week against the certification of President-elect Joe Biden’s victory. Mast lost both legs in an explosion while serving in the U.S. Army in Afghanistan in 2010. Tapper noted Mast’s sacrifice “fighting for democracy abroad, although I don’t know ... about his commitment to it here in the United States.”

As Trump fades, the media turn their sights on his voters pic.twitter.com/CNV2igENWT

➤UNEMPLOYMENT CLAIMS SPIKE TO HIGHEST SINCE AUGUST: The number of people filing unemployment claims spiked last week to 965,000, according to data released yesterday by the Labor Department, the most weekly claims since late August. The economic effect of the surge of the coronavirus that has been going on for weeks now may have increased layoffs, according to AP, which also cited the possible effect of state employment offices having been closed over the holidays, meaning some people had to wait until last week to apply. After soaring to nearly seven million last spring as the result of the nationwide lockdowns at the start of the pandemic, weekly claims eventually came down, but have remained over 700,000 since September. Before the pandemic, weekly claims were usually around 225,000. 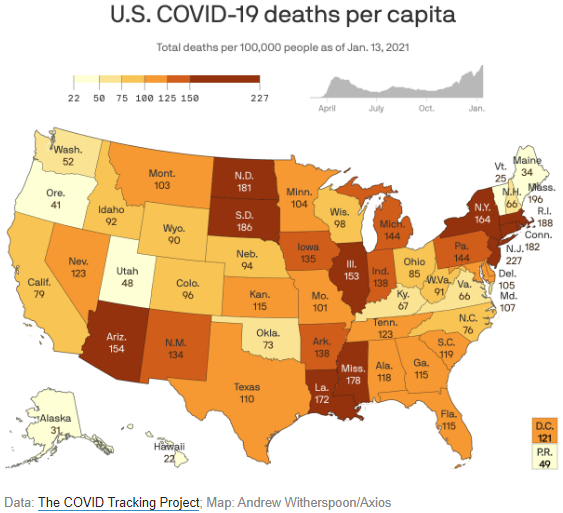 ➤STUDY: MALES OF ALL AGES MORE AFFECTED BY COVID-19 THAN FEMALES:  Males are more likely to test positive for COVID-19 than females are, finds a new study. Houston Methodist Research Institute researchers used data from a large healthcare provider in the Houston, Texas metro area and found males had a higher likelihood of being diagnosed with COVID-19 than females, and were more likely to require ICU care compared to females (34% versus 28%). Study authors say there is a clear and strong association between male sex and COVID-19 susceptibility, complications, and poor outcomes. They note that understanding the sex differences in the disease is a fundamental step toward improved disease management and intervention strategies for both men and women.
➤FEDERAL PRISONER WHO WAS DRUG TRAFFICKER IS EXECUTED: A 52-year-old federal prisoner who had been a drug trafficker was executed last night, the 12th prisoner executed at the federal prison complex in Terre Haute, Indiana, since the Trump administration restarted federal executions last year after none were carried out for 17 years. Corey Johnson had been convicted of killing seven people in gang violence in Richmond, Virginia, in 1992. In a final statement released by his attorneys after his execution, Johnson said, "I want to say that I am sorry for my crimes. I wanted to say that to the families who were victimized by my actions." Another federal execution is set for today.

Cuomo spokesman on criticisms from @JaniceDean (who lost both of her in-laws to COVID in NY nursing homes): “She’s not a credible source on anything except maybe the weather.” 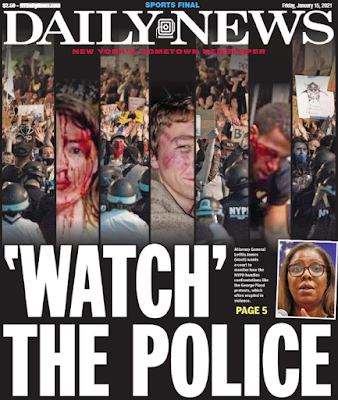 ➤N.Y. ATTORNEY GENERAL SUES NYPD OVER RESPONSE TO GEORGE FLOYD PROTEST: New York state's attorney general sued the New York City police department yesterday over its response to the George Floyd protests last year. Attorney General Letitia James' lawsuit includes dozens of examples of alleged police misconduct, including the use of pepper spray and batons on protesters, arresting medics and legal observers, and using a technique called kettling to trap protesters. The suit calls the behavior part of a longstanding pattern of abuse resulting from inadequate training, supervision and discipline. James is seeking reforms, including the appointment of a federal monitor to oversee the NYPD's policing tactics at protests.
➤PIZZA IS THE WORLD’S MOST POPULAR TAKEAWAY DISH:  The world’s favorite takeout dish is apparently pizza. British insurance comparison company MoneyBeach analyzed Google search results from 109 countries and found that “pizza takeaway” was the top food-related query people entered across 44 nations. It was the top choice in Italy, Barbados, Argentina, Morocco, India, and many others. Chinese food was the second most-searched for food type, with 29 countries (including the U.S., Mexico, Australia, the U.K. and China searching for it), while sushi was the top searched cuisine in ten countries (coming in third), and "fish and chips" took fourth place. Since the beginning of the pandemic, food dinnertime takeout and delivery service use has drastically increased among those in the U.S.
➤McDONALD’S THROWBACK THURSDAY 2021 DEALS FEATURE SOME ITEMS UNDER 25 CENTS: McDonald’s has announced it will run a promotion for six weeks called McDonald’s Throwback Thursday 2021 deals. They started yesterday and will continue through February 18th. Each Thursday you can get some menu item for a very low price, but the catch is you must also make an additional purchase of at least $1. You can get a cheeseburger on January 21st or February 18th for 25 cents, for example, or a small shake for 25 cents on January 28th, among other things. You can only get the special deals through the McDonald’s app.


🏈JAGUARS HIRE MEYER AS HEAD COACH: The Jacksonville Jaguars hired Urban Meyer yesterday to be their new head coach, giving him his first job in the NFL. The 56-year-old longtime college coach won three national championships, two with Florida and one with Ohio State, after coaching at Bowling Green and Utah, ranking seventh all time in collegiate winnng percentage. Meyer left Ohio State in 2018 because of a congenital cyst in his brain that had previously required surgery and was bothering him. He was a college football analyst for Fox Sports for the past two years.

We've reached an agreement in principle with Robert Saleh to become our head coach.


🏈SALEH IS JETS' NEW HEAD COACH: The New York Jets reached an agreement in principle last night with San Francisco 49ers defensive coordinator Robert Saleh to be their new head coach. It's believed the 41-year-old Saleh, who's the son of Lebanese parents, will be the first Muslim head coach in NFL history. Saleh is the seventh straight coach hired by the Jets to not have previous head coaching experience.

🏈STEFANSKI BACK WITH BROWNS AFTER 10 DAYS AWAY WITH COVID-19: Cleveland Browns head coach Kevin Stefanski was back at the team's facility on Thursday, 10 days after he tested positive for Covid-19, forcing him to miss the Browns' playoff win against the Pittsburgh Steelers last Sunday. Stefanski instead watched his team get the 48-37 victory from the basement of his Ohio home. But he will be there this weekend when the Browns play the defending Super Bowl champion Kansas City Chiefs in the divisional round. Stefanski only had mild Covid symptoms.

🏀CELTICS EXPECTED TO RETURN TO PLAY TODAY AFTER GAMES MISSED DUE TO COVID: The Boston Celtics are expected to return to play tonight with a game against the Orlando Magic, after missing three games between Sunday and Wednesday because some players tested positive for the coronavirus and others couldn't play because of contact tracing, leaving them without enough eligible players. Meanwhile, the game between the Phoenix Suns and the Indiana Pacers scheduled for Saturday has been postponed because the Suns won't have enough eligible players, largely due to contact tracing. It's the ninth NBA game postponement for the week.

🎾MURRAY'S STATUS UNCLEAR FOR AUSTRALIAN OPEN AFTER POSITIVE COVID-19 TEST: British tennis player Andy Murray's status is unclear for the Australian Open after he tested positive for the coronavirus Thursday just days before he was set to leave for Australia. The three-time Grand Slam champion is isolating at home. U.S. women's player Madison Keys has also tested positive before her scheduled flight to Australia, and is self-isolating at home. The Australian Open, which was delayed three weeks because of Covid-19 restrictions, is set to begin on February 8th. However, players and officials must spend 14 days in quarantine once they arrive in Australia, and players who previously tested positive had to provide medical information proving they are recovered and no longer infectious.