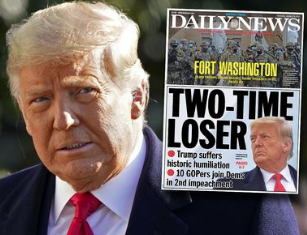 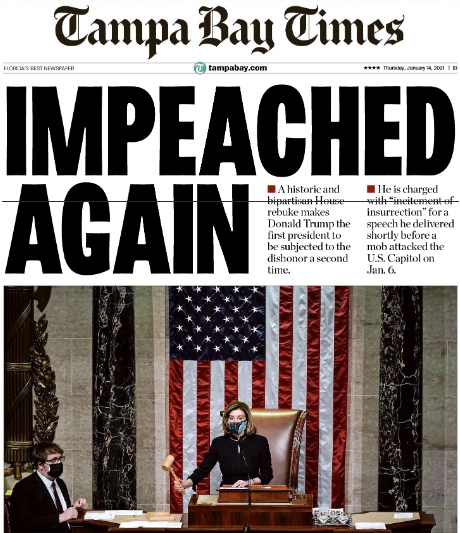 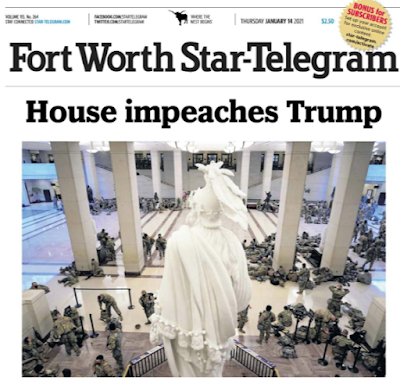 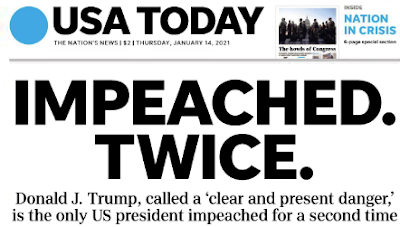 President Trump was impeached by the House Wednesday on a charge of "incitement of insurrection" in the wake of the assault on the Capitol that he's accused of inciting, becoming the only president to be impeached twice. Ten Republicans joined with all the Democrats in the 232-197 vote, including Rep. Liz Cheney, the third-ranking House GOP leader, making it the most bipartisan impeachment in modern times.
The impeachment process was very swift, coming just a week after last Wednesday's attack. Urging that Trump be impeached, Speaker Nancy Pelosi and other Democrats warned that the president is a danger, stating, "He must go, he is a clear and present danger to the nation that we all love." But Minority Leader Kevin McCarthy led many Republicans in saying that impeachment would further divide the country.

BREAKING: The House has voted to impeach President Trump for incitement of insurrection, with 10 Republicans supporting the resolution. He is now the first president in U.S. history to be impeached twice https://t.co/AOSBKrUbre pic.twitter.com/N1kkJvgb44


Despite the impeachment, Trump is virtually guaranteed to end his term as scheduled on January 20th, with Senate Majority Leader Mitch McConnell saying the earliest an impeachment trial could start is next Tuesday, the day before President-elect Joe Biden's inauguration. A trial can be held after Trump leaves office, and would have as a main goal preventing him from being able to hold federal office again. McConnell said in a note to colleagues yesterday that he had, quote, "not made a final decision on how I will vote." A two-thirds vote in the Senate would be required for conviction.

➤TRUMP RELEASES VIDEO CALLING FOR NO VIOLENCE AT UPCOMING DEMONSTRATIONS: President Trump released a video yesterday from the Oval Office in which he condemned last week's attack on the Capitol and called for there to be no violence at demonstrations that are reportedly being planned in the days up to and on President-elect Joe Biden's inauguration that have FBI and law enforcement officials very concerned. In his remarks, which didn't mention his impeachment that had happened earlier in the day, Trump said in his first condemnation of the the Capitol attack, "Like all of you, I was shocked and deeply saddened by the calamity at the Capitol last week." He stated, "Mob violence goes against everything I believe in and everything our movement stands for." Saying he'd been briefed on threats related to upcoming demonstration, Trump said, "I cannot emphasize that there must be no violence, no law breaking and no vandalism of any kind," and stated, "[I] am asking everyone who has ever believed in our agenda to be thinking of ways to ease tensions, calm tempers and help to promote peace in our country."

Meanwhile, Washington, D.C., was in a state of lockdown because of the threat surrounding next week's inauguration in the wake of the attack on the Capitol. Fencing had been put up around landmarks and traffic blocked off from a huge part of downtown. More than 15,000 National Guardsmen from several states, some of them armed, were in the nation's capital, and officials said more may be called. However, before being able to send more guardsmen, state leaders have to be sure their own state capitols are protected, as the FBI has warned of threats to them in all 50 states. 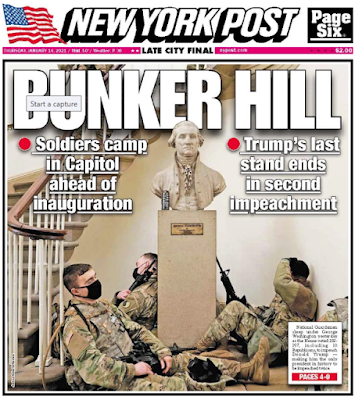 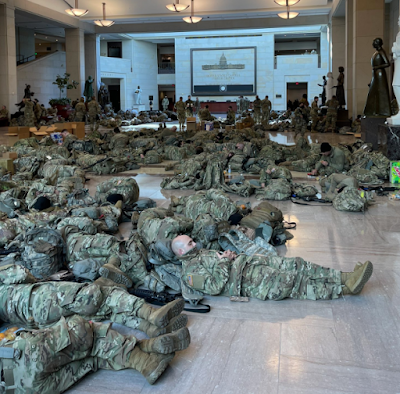 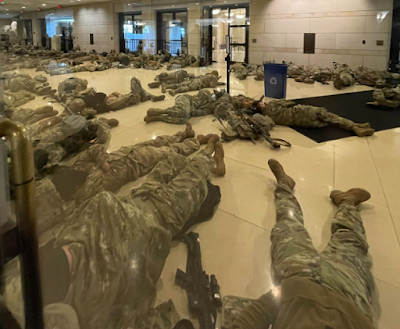 Stunning photos yesterday showed scores of guardsmen sleeping on the floor of the Capitol building.

There are more US troops deployed on Capitol Hill now than in Iraq or Afghanistan. The 15,000 mobilized for Inauguration equals 3 times the number of US troops in Iraq and Afghanistan combined.

➤MORE THAN 4,000 CORONAVIRUS DEATHS YESTERDAY FOR THIRD TIME: There were 4,022 deaths in the U.S. from the coronavirus yesterday, according to The COVID Tracking Project, the third time there has been more than 4,000 deaths in one day. Johns Hopkins University says the total number of deaths is now more than 384,700 as of early this morning. More than 38,000 Americans have died of Covid-19 in the first two weeks of the year, and a forecast from the Centers for Disease Control and Prevention is projecting that another 92,000 will die over the next three weeks. Hospitalizations and deaths are continuing at the worst rates of the pandemic, as they have for weeks now, even as vaccines are being administered.

Apple announces its latest set of major donations as part of its $100,000,000 initiative to help dismantle systemic barriers and promote racial equality for people of color. https://t.co/69tChpi4c2


➤EX-MICHIGAN GOVERNOR SNYDER CHARGED IN FLINT WATER SCANDAL: Former Michigan Republican Governor Rick Snyder was charged Wednesday with willful neglect of duty in the Flint water scandal, which left residents of the city drinking water contaminated with lead. The charges are misdemeanors, punishable by up to a year in jail and a $1,000 fine. Charges are also expected against others, including officials who were Snyder's state health director and a senior adviser. Snyder served as governor from 2011 through 2018, and on April 25, 2014, an emergency manager he'd appointed to run the financially-struggling, majority-Black city decided to save money by using the Flint River for water while a pipeline from Lake Huron was under construction. But the water wasn't treated properly, and released lead from homes' old plumbing into the water. Despite complaints from residents, Snyder's administration didn't take significant action until a doctor reported elevated lead levels in children about 18 months later. There were also at least 90 cases of Legionnaires’ disease in Genesee County, including 12 deaths, and it was found there wasn't enough chlorine in the water-treatment system to control legionella bacteria.


➤DOLLAR GENERAL FIRST RETAILED TO PAY EMPLOYEES TO GET COVID VACCINE: Dollar General has become the first major retailer to pay its employees to get the coronavirus vaccine. All of its 157,000 workers are being offered four hours' pay to get the shot, the company announced yesterday. Dollar General CEO Todd Vasos told The Wall Street Journal, "We felt the right thing to do was to break down these barriers to vaccination. We believe as the vaccine continues to gain momentum that we've got to get it to rural America." Insider cited experts as saying that although employers could mandate that their workers get the vaccine in certain conditions, most will likely encourage getting it, rather than require it. The Equal Employment Opportunity Commission has said workers can refuse the vaccine due to underlying medical conditions or religious beliefs. However, employers can separate them from their other workers.
➤NEW $600 STIMULUS CHECKS FROM UNCLE SAM FUEL JANUARY SPENDING BOOM AT RETAILERS:  Americans are spending money at big-time retailers again after a period of cautious spending over the holidays. Retailers such as Lululemon, Crocs, Bed Bath & Beyond and others released numbers this week showing much better than expected fourth quarter results. Jeffries retail analyst Janine Stichter notes, “We believe a number of factors are at play, including some benefit from stimulus beginning to take hold.” Many company leaders expressed optimism at the trends so far for January. This comes as the U.S. economy lost some 140,000 jobs in December 2020.

➤BETTY WHITE IS READY: Betty White is set to celebrate her 99th year on earth Sunday, and she tells People how she stays so sunny. She tells People: "I don't like the other side. The positive side is a lot more fun." Plus: "I am blessed with good health, so turning 99 is no different than turning 98." They key to a long and happy life, in the end, she said, is "a sense of humor. Don't take yourself too seriously. You can lie to others — not that I would — but you cannot lie to yourself."
➤PEOPLE ARE PAYING CELEBRITIES TO BREAK UP WITH THEIR PARTNERS VIA CAMERO: 2020 was a weird year for many things—including breakups. Apparently, people have been turning to the service Cameo to pay celebrities to dump their significant others for them. The New York Times reports Sugar Ray frontman Mark McGrath has become a popular choice for Cameo users looking to pass their breakup responsibilities onto a celebrity. He told the paper he’s delivered 15 Cameo breakups, but he says he rejects the role as the “face of breakup Cameo.” And adds, “I’m doing these Cameos for fun! I wouldn’t want to hurt anybody’s feelings.” But not all celebrities on the platform share that feeling—Matthew Perry has made it clear he’ll deliver “any kind of messages”, while Donald Trump impressionist J-L Cauvin says he’s still hoping to get a divorce request before President Donald Trump leaves office.

The defending #StanleyCup champions are in full form tonight! #NHLFaceOff


🏒NHL SEASON BEGINS: The NHL's new season got underway Wednesday, just three-and-a-half months after the Tampa Bay Lightning won the Stanley Cup in a season that was suspended for months due to the coronavirus. Each team is scheduled to play a reduced 56 games during the regular season. There were five games played yesterday, including a 5-1 win by the defending champion Lightning over the Chicago Blackhawks. In the other results:
🏀REPORTS: HARDEN GOING TO NETS IN FOUR-TEAM TRADE: James Harden is leaving the Houston Rockets for the Brooklyn Nets in a four-team trade that also involves the Indiana Pacers and the Cleveland Cavaliers, according to media reports yesterday. The Nets sent Houston multiple players and draft picks, among them Caris LeVert, who the Rockets then traded to the Pacers for Victor Oladipo. Center Jarrett Allen and forward Taurean Prince are going to the Cavaliers from the Nets, and the Rockets are getting guard Dante Exum from Cleveland and forward Rodions Kurucs from Brooklyn. Harden, who was in his ninth season with Houston, wasn't happy there, and had said just a day earlier that the Rockets aren't, quote, "good enough" to compete for the NBA championship
🏀THREE NBA GAMES POSTPONED DUE TO CORONAVIRUS: Three NBA games were postponed last night (January 13th) due to the coronavirus, with either positive tests or contact tracing issues reducing the number of available players, bringing the total games postponed across the league this week alone to eight. The NBA also said that 16 players had tested positive between January 6th and 12th, the most by far in one week since training camps began. The games canceled were between the Phoenix Suns and Atlanta Hawks, the Utah Jazz and the Washington Wizards, and the Orlando Magic and Boston Celtics.

🏈AP: EAGLES WON'T BE PENALIZED FOR QB MOVES IN FINAL GAME: The NFL won't penalize the Philadelphia Eagles for its quarterback decisions in the final regular-season game against Washington, AP reported Wednesday (January 13th). Since-fired Eagles head coach Doug Pederson removed Jalen Hurts for third-string quarterback Nate Sudfeld in the fourth quarter of a 20-14 loss. The Eagles were behind by a field goal when Sudfeld, who hadn’t thrown a pass in a game since 2018, came in. He was picked off on his second attempt and also lost a fumble. Washington won the NFC East with the win and the New York Giants were eliminated. Giants players were angry, believing the Eagles tanked, since the loss gave them the sixth pick in the draft instead of the ninth. But after investigating, the NFL couldn't determine if the Eagles did or not.

🏊U.S. OLYMPIC GOLD MEDAL-WINNING SWIMMER KELLER CHARGED IN CAPITOL ATTACK: Klete Keller, who won two Olympic gold medals for the U.S. as a swimmer, was charged yesterday (January 13th) with participating in last week's attack on the U.S. Capitol, after he was allegedly spotted on video from the assault. An FBI complaint requested a warrant charging him with knowingly entering a restricted building to impede an official government function, disorderly conduct, and obstructing law officers. AP reported that it wasn't clear if he'd been taken into custody. Keller, who's 38, won gold in the 2004 and 2008 Olympics anchoring the four-man team that included Michael Phelps in the 4x200 freestyle. Keller has deleted his social media accounts, but they reportedly showed he was an outspoken supporter of President Trump.
Posted 4:33:00 AM