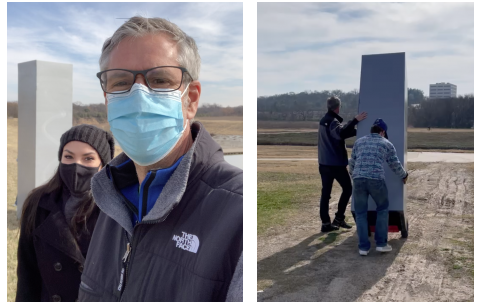 On the Fort Worth-area airwaves on Wednesday morning, two radio hosts had a confession to make regarding the Fort Worth monolith that popped up over the weekend and gained attention Tuesday. 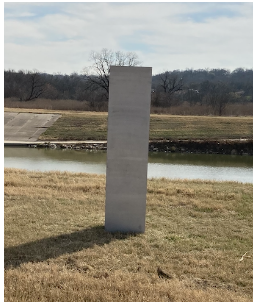 “We found out definitively who put that there,” said Mark “Hawkeye” Louis, a co-host of the Hawkeye in the Morning show that airs on Cumulus Media's KSCS New Country 96.3.

The Ft. Worth Star-Telegram reports Julie Fisk, the woman behind the Haunted AF paranormal podcast, was on the phone and asked Louis, “Who?”

“We did,” Louis said, referencing him and his co-host Michelle Rodriguez. “We hired the kids from Millsap High School out in Millsap, Texas to build that for us. We’ve been working on that for a month.”

The confession brought to an end the mystery over the roughly 10-foot-tall hollow sculpture planted along the Trinity Trail, which attempted to continue a myth that began in 2020 with taller and shinier monoliths found in places like Utah, California and Romania. In many ways, it succeeded: News of the monolith spread over Twitter, and crowds gathered around the object on Tuesday.

Other people weren’t quite impressed, saying it looked more like it had been made in a high school woodshop class. They were actually right.

Lewis said in a Twitter message on Wednesday his radio show audience was in on the monolith from the beginning, when he and Rodriguez asked one morning if anyone was willing to help them build a monolith. They hired a metal shop instructor from Millsap High School, who enlisted the help of his students.

They originally wanted to put it up in early December, Louis said, but it took longer than anticipated and wound up costing more than $300. He acknowledged in the end it didn’t look like it was “made by an advanced society.” He and Rodriguez wheeled it out on a cart on Saturday.

They pretended to know nothing about it as the news began to trickle out on social media, he said.

“That was part of the fun, we acted as if we had no idea how it got there,” Louis said.