“SiriusXM produced another strong quarter and the integration with Pandora is well underway,” said Greg Maffei, Liberty Media President and CEO. “Both Formula 1 and the Braves kicked off their 2019 seasons and broke ground on exciting new developments – Formula 1 on the racetrack in Hanoi and the Braves on the second phase of the Battery Atlanta.” 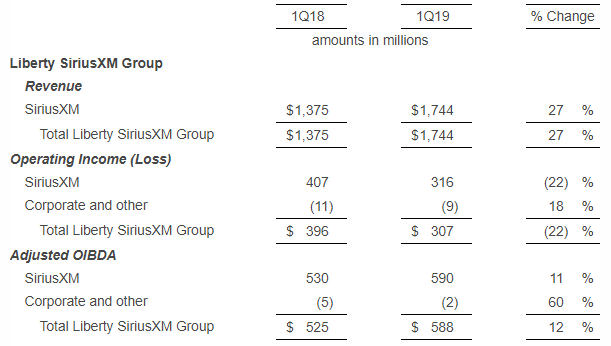 SiriusXM’s financial results above include the results of Pandora beginning February 1, 2019, the date Pandora was acquired by SiriusXM. Pro forma results for SiriusXM including Pandora for the full three months ended March 31, 2019, excluding acquisition accounting adjustments, can be found in Liberty Media’s Form 10-Q for the quarter ended March 31, 2019.
Posted 3:50:00 AM