Mary G. Berner, President and Chief Executive Officer of Cumulus Media said, “Driven by a steady focus on our key strategic priorities including accelerating digital growth, our strong performance continued in Q1 2019 with year-over-year increases in both revenue and EBITDA.

"Additionally, we now have four pending M&A transactions that collectively are expected to generate more than $120 million of net proceeds and bolster our competitive positions in Indianapolis and Allentown.  Combined with the $25 million voluntary prepayment made in February, these proceeds will reduce our net leverage to 4.8x on a pro forma basis.  We look forward to continuing our disciplined execution against all our strategic priorities and financial goals in the quarters ahead.” 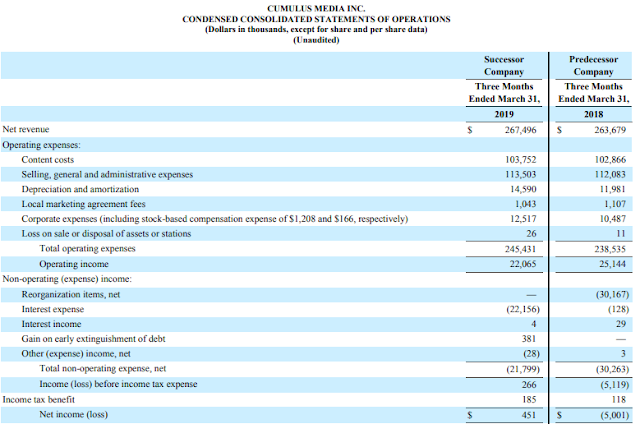 The Company operates in two reportable segments, the Cumulus Radio Station Group and Westwood One. Cumulus Radio Station Group revenue is derived primarily from the sale of broadcasting time on our owned or operated stations to local, regional and national advertisers. Westwood One revenue is generated primarily through network advertising on our owned or operated stations and on its approximately 8,000 affiliate stations.

During the earnings call with analysts, CFO John Abbott described the local spot market as "tough".

Concerning Westwood One, "Abbott stated the network business produced another solid quarter with revenue growth -- revenue growing $5.6 million or 5.9% from first quarter of last year. This increase was driven mostly by growth in the core ad sales business and podcasting, partially offset by the negative comparison to last year when we had revenue from the Olympics."

Berner told analysts that Podcasts are profitable for the company  "So far in 2019, we continue to see the same strong growth in the podcast that we have enjoyed since we started the business. As the exclusive partner for over 40 podcasts we've generated nearly 52 million downloads in March 2019, more than doubled the 23 million generated in March 2018. And that doesn't include our growing local podcast businesses. By our estimation, this will put us in the top five largest podcast companies measured by Pod Track in March. What is particularly notable about this growth, is that, that we have been able to achieve it while maintaining profitability."
Posted 3:52:00 AM