Entercom's HotAC WSTR Star 94.1 FM has done a near clean sweep of its entire on-air lineup, keeping only Jenn Hobby as a primary morning host, according to Atlanta Media Watcher Rodney Ho ajc.com.

Out the door:
Star 94.1 has consistently lagged behind the other three pop stations (Q100, Power 96.1, B98.5) in town in ratings, is bringing in two new male “friends” to help out Hobby's new show “Jenn and Friends.”

According to Ho, suits clearly had this planned out far in advance. They had promotional materials about the revised line-up ready for the sales staff to distribute to clients by the middle of the day.

One new member is Mark Owens, a producer on sister station 92.9/The Game and a long-time between-innings host at Atlanta Braves games. He was also known as Phil Terrana on the Bert Show many years ago, an inside joke since that was former Star 94 morning host Steve McCoy’s real name.

So for Owens, this is an ironic new home. Curtis Slade is described in marketing materials as “minority interior decorator who loves traveling and shopping.” He has been working in Myrtle Beach, S.C., the same city where current Star 94.1 program director Ron Roberts used to be senior VP of programming for iHeartRadio.

Show director Jeannine Riley remains on the morning show.  She recently took over for Kelly Cheese, who left voluntarily, then found a radio job in Michigan. 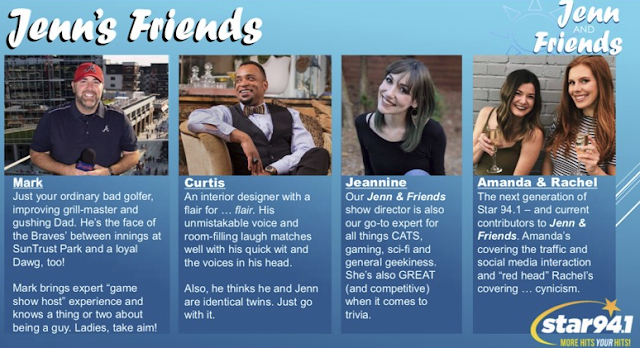 And taking over for Mike Marino from 2 to 6 p.m. will be a familiar name from the past: Mike Kannon. Kannon used to be on the rhythmic top 40 station 95.5/The Beat, which was a popular station in the 2000s but died when Cox Media Group needed a major signal for its news station WSB.

Hobby, a fixture on Atlanta radio for 18-years, used to work at the Beat as well before coming to the Bert Show in the early 2000s. She worked there until 2012, then spent four years at Kicks 101.5 before moving to Star with Dauler.

Since McCoy and Vikki Locke left Star more than 11 years ago, the station has had trouble finding a long-term solution for mornings. This will their sixth morning show incarnation since 2008.

Ousted Jeff Dauler is not saying anything about his sudden departure as morning host Thursday from Star 94.1, probably because his severance agreement limits his ability to do so. But, according to  Ho,  his wife Callie, in an Instagram Story video.

Based her commentary, it’s clear Jeff  was not happy with whatever change in direction the show had taken, especially after new program director Ron Roberts took over last year. Callie, who works with HLN host Robin Meade, was in Nashville for work when Jeff called her with the  news. He told Callie: “I’m so relieved.” Callie cried but later said she, too, felt relieved: “I am so glad we can move on to something that is a better fit. This was such a cluster of a couple of years!”

But she said the firing was still a surprise and it was “heartbreaking” that the station had been planning this while she and Jeff were dealing emotionally with a miscarriage earlier this year.
Posted 5:45:00 AM