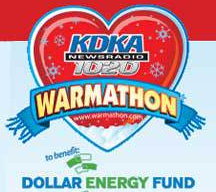 CBS Radio/Pittsburgh has announced the results of its annual 'Warmathon', which raises donations to help keep the heat-on for families in the Pittsburgh area.

Dollar Engery Fun CEO Chad Quinn stated, “The generosity of our donors is overwhelming.  With more than $400,000 raised, this is our best Warmathon we’ve had in our seven years of putting on this event.  We look forward to using the contributions made over the past two days to help our neighbors in need maintain or restore safe utility service this winter.”

CBS Radio/Pittsburgh VP/GM Michael young said, “Helping our community is part of the DNA of KDKA.  The kindness of Southwestern Pennsylvanians is overwhelming and continues to impress us at KDKA year after year.”

The Citizens Bank Foundation, a longtime supporter of the Warmathon, donated $50,000 in funding to match individual donations received during the two-day event. Over the past seven years, the foundation’s combined Warmathon support of $300,000 has helped more than 1,700 families in Southwestern Pennsylvania.

“This year’s recording breaking severe winter weather has impacted Pittsburgh’s neediest families the most,” said Daniel K. Fitzpatrick, president & CEO, Citizens Bank of Pennsylvania. “Through our annual partnership with Dollar Energy Fund and KDKA Radio and the community’s generosity, we can strengthen our community by helping families avoid a painful choice: eating or heating their home.”
Posted 3:04:00 AM