After two years of jumping through financial hoops, the brains behind the heyday years at WMMS 100.7 FM will be launching oWOW, a Cleveland-based live and local internet radio station, this Friday, according to freshwatercleveland.com.

oWOW will feature livel personalites. Ravena Miceli will join three other oWOW personalities: Steve Pappas, Susie Frazier and Charlotte DiFranco, all of whom have traditional radio experience. The staff has been trotting between a makeshift office (affectionately nicknamed "the trolley") and the temporary studio while their permanent 1,600-square-foot digs undergo construction. Scheduled for completion in mid to late spring, the space will include a studio and a production area with large interior windows so 78th Street visitors can look in on the action, be it a celebrity interview, a live performance or just the everyday studio buzz.

"What used to get people interested in radio was that it was exciting," says oWOW director of sales and marketing Jim Marchyshyn. "You looked in. You saw the DJ and you thought: this is cool. We are in show business. That's been forgotten."

"Studios are all empty," adds Gorman of today's traditional radio venues. "They don't have an air staff. Most of them are disembodied voices coming from another city. We're real live people. We're based in Cleveland. We can do all the things that radio can no longer do." 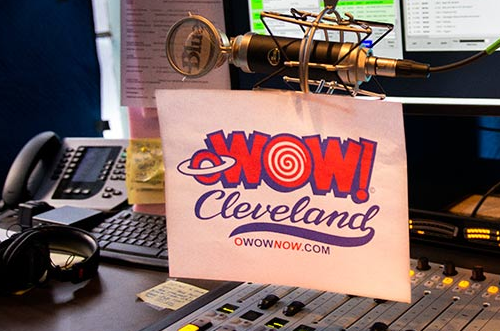 That means attracting listeners as well as advertisers. To wit, House of LaRose and Budweiser will be sponsoring oWOW's launch this weekend. As for programming, Friday Night Live will run Fridays from 5 p.m. to midnight and exclusively feature live concert audio. Daily programming will aim to give people back that live mix-tape feel, one the oWOW team thinks listeners will respond to in a world where bots make calculated music recommendations based on mysterious algorithms.

oWOW was funded by a host of private investors, a local bank and a loan and grant from the City of Cleveland.