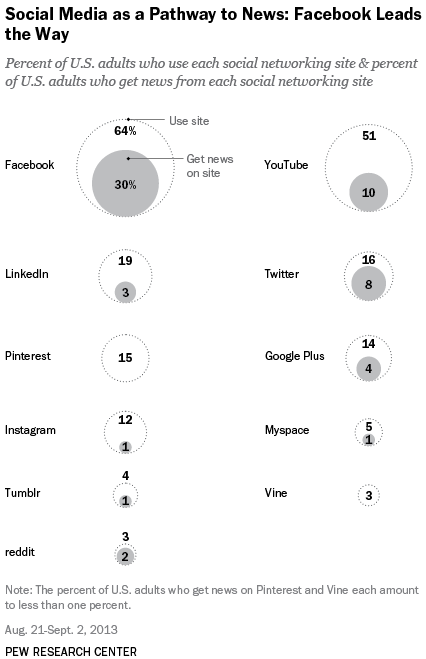 The ever-growing digital native news world now boasts about 5,000 digital news sector jobs, according to our recent calculations, 3,000 of which are at 30 big digital-only news outlets.

According to a new study by Pew Research, many of these digital organizations emphasize the importance of social media in storytelling and engaging their audiences. As journalists gather for the annual Online News Association conference, Pew offer answers to five questions about social media and the news.

1. How do social media sites stack up on news? When you take into account both the total reach of a site (the share of Americans who use it) and the proportion of users who get news on the site, Facebook is the obvious news powerhouse among the social media sites. Roughly two-thirds (64%) of U.S. adults use the site, and half of those users get news there — amounting to 30% of the general population.

YouTube is the next biggest social news pathway — about half of Americans use the site, and a fifth of them get news there, which translates to 10% of the adult population and puts the site on par with Twitter. Twitter reaches 16% of Americans and half of those users say they get news there, or 8% of Americans. And although only 3% of the U.S. population use reddit, for those that do, getting news there is a major draw–62% have gotten news from the site.