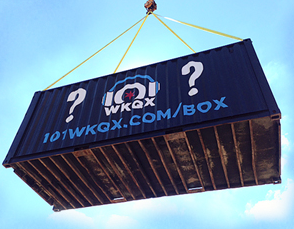 WKQX 101.1 FM 101WKQX Monday launched  Big Black Box promotion, only the box is extremely big and contains ten, mostly expensive items. In a promotion designed to draw more attention to the station, listeners are asked to guess what all is in the box. One correct guess will earn the guesser $500. Ten correct guesses wins all ten items.

The gigantic box has already began to move all around Chicagoland, according to CRM.  It has been seen hanging from a crane on the side of local highways as sort of a "pop-up" billboard (1-90/Jane Addams Memorial Highway in the near-west suburbs). It has also been loaded on to the back of a truck and driven around town.

The contest officially began this morning on the Cumulus station. Out of the ten items in the box, the first one was freely revealed: a 2014 Fiat 500 Classic. Listeners now need to guess the next nine items.

Clues will be given out on WKQX-FM four times each weekday: 7:30am, 10:30am, 1:30pm, and 5:30pm, along with occasional bonus clues being tossed out during the daytime. At that point, the station's phone lines will open up. Caller #10 gets to take a guess.

24 hours after the clues have been given on the air, they will be posted up on the WKQX-FM website.
Posted 3:58:00 AM