The SCBA White Paper Research Report provides in-depth analysis on subjects having a direct impact on Southern California Radio. This report is focused on new SCBA requested research that compares the consumer response and listener satisfaction of Broadcast Radio to that of the Pandora internet music service.

“We strongly urge all audio advertisers to read this SCBA White Paper and then draw their own conclusions about Radio’s true value as compared to the Pandora internet music service,” said SCBA President Thom Callahan. “This new research showcases Southern California Radio’s listening growth and as a result, its consumer satisfaction. In contrast, the Pandora internet music service has suffered considerable loss of listener satisfaction as well as time spent listening and log in sessions,” said Callahan.

The SCBA White Paper Research Report provides market research data from Bridge Ratings LLC, a research firm providing consumer habits to media companies and investment firms seeking timely behavioral data related to media use. The SCBA White Paper describes the stark contrast between the two media in the areas of listener growth, satisfaction, and as important, the recognition of commercials heard on both media over time. 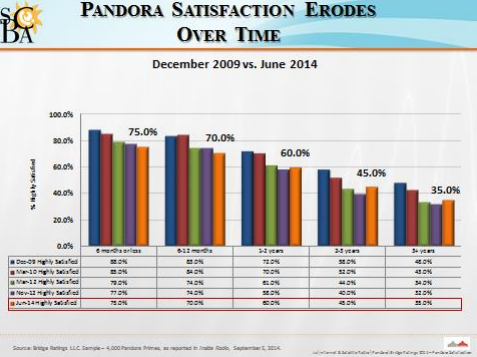 The SCBA White Paper contends that based on this consumer study, Broadcast Radio clearly is the winner in the areas of consumer recognition of commercials, audience growth rates, and overall listener satisfaction. Indeed, one of the key factors in Pandora’s decline in listener satisfaction is the fact that commercials are airing at all on this internet service.

Highlights of the SCBA White Paper include an impressive 7.4% listener growth rate for Southern California Radio over the past 6 years which demonstrates continuous listener satisfaction. Conversely, the report reveals serious setbacks to the Pandora internet music service including a 70.3% loss in Time spent per session in a 25 month period and an 83.3% loss in daily log-ins to its site. The most ominous new information is the fact that consumer awareness of Pandora aired commercials drops to only 20% within 24 months compared to a 93% awareness for commercials aired on Broadcast Radio over the same time frame.

“This SCBA White Paper clearly reveals the consumer preference for Broadcast Radio today,” said Callahan. “We invite and encourage fact-based comparisons of Broadcast Radio to Pandora seven days a week. Separating fact from hype is always in the advertiser’s best interest.”
Posted 10:29:00 AM