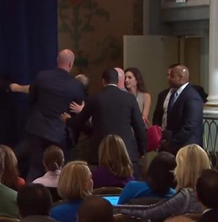 Bronk, who works as a writer on the popular radio show, had to be dragged out when he began screaming, making reference to the incident that got former running back Ray Rice indefinitely suspended from the league.


“What are you doing?” Bronk yelled, as he was dragged away by security. “Don’t take me to an elevator!”

Stern’s show has become infamous for being connected with pranks at press conferences and during news coverage. During CNN's coverage of an earthquake in August, the network interviewed a man who claimed to be a spokesman for the San Francisco police. It turned out to be a prank from a Howard Stern fan.
Posted 3:14:00 AM