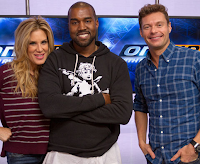 Kanye West is so in love that he boasted about Kim Kardashian to Ryan Seacrest on his 102.7 KIIS-FM radio show Tuesday in a pretty big way -- comparing her to Michelle Obama, according to USAToday.

At one point in the long interview, Seacrest asks what frustrated West, and he spoke about life being unfair.

"Classism has been going on before racism. We're classist. We have our cool table … and there's no way Kim Kardashian shouldn't be on the cover of Vogue. She's like the most intriguing woman right now. She's got Barbara Walters calling her like every day … and collectively we're the most influential with clothing."

He added, "No one is looking at what [President] Obama is wearing. Michelle Obama cannot Instagram a [bikini] pic like what my girl Instagrammed the other day… so when we [editor-in-chief of French Vogue] Carine Roitfeld supports my girl (Roitfeld put Kim on the cover of her new fashion publication, CR Fashion Book), that's a breakthrough … there's a wall of classism that we are breaking through."

The comparison to President and Mrs. O. has been spreading around the Web.