Spotify Is Pulling Away From Apple Music 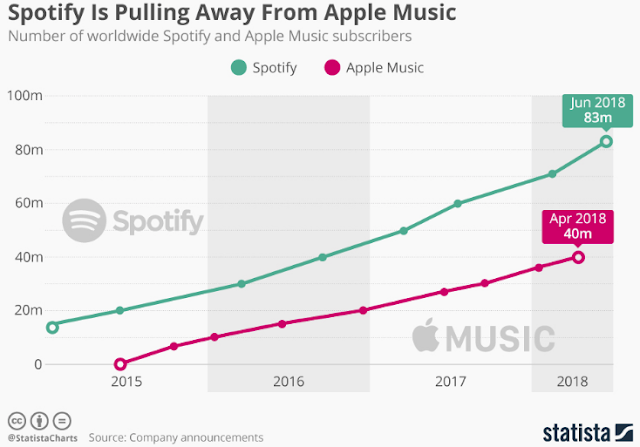 When Apple launched Apple Music in June 2015, many people thought it would be a question of ‘when’ rather than ‘if’ Apple would catch up with and eventually surpass Spotify. Apple’s financial and marketing power combined with an installed base of hundreds of millions of iOS devices seemed like a tough combination to beat for the Swedish music streaming pioneers, according to Flix Richter at Statista.

And yet, ever since Apple launched its own streaming service halfway through 2015, Spotify has managed to keep Apple Music at arm’s length. If anything, Spotify appears to be pulling away from Apple Music in terms of paid subscribers. As the following chart illustrates, the gap between the two streaming services has gradually widened from 20 million when Apple Music was launched to around 40 million subscribers, which is where it is today.
Posted 3:23:00 AM