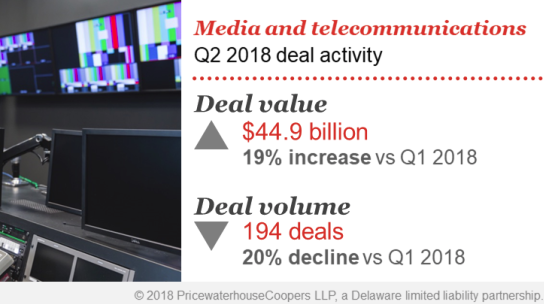 Mergers and acquisition deal-making for media and telecommunications companies revealed a mixed picture in the second quarter.

The number of deals dropped to 194 from 244 in the first quarter of this year, according to PwC (PricewaterhouseCoopers). Second-quarter deals this year were also down versus second-quarter 2017, when the total was 219. 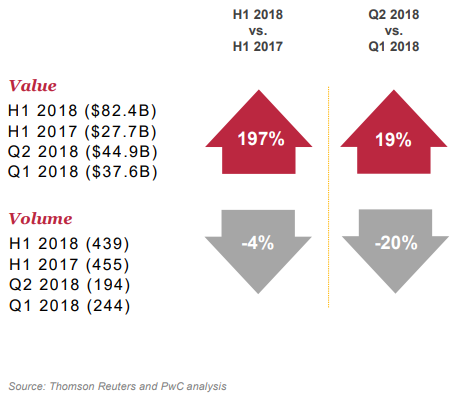 Since the start of this year, three companies have announced deals in the first half of 2018 were valued in excess of $5 billion.

For the first half of this year, there were 143 advertising/marketing deals; 97, internet/information; 54, publishing; 41, telecommunications; 33, film/content; 30, recreation/leisure; 26, broadcasting; 7, music, and 5, cable.

As PwC noted last quarter, broadcasting deals have been on the rise as a new round of consolidation has resulted in not only acquisitions, but also divestitures, as a result of directives from the regulators.

The number of announced deals in H1 2018 were up 44% over the same period in 2017. While there was certainly more activity in the subsector, disclosed deal value remained stable at approximately $5.5B. Sellers in the quarter included  Sinclair and Tribune, who were required to divest certain assets in order to obtain regulatory approval for their merger. HC2 Holdings continued to be an active acquirer in the subsector, being involved in almost half of the announced television deals.

While often lower profile deals, PwC notes it continued to see steady interest in radio deals, accounting for almost a quarter of Broadcasting deals in the first half of 2018.
Posted 3:52:00 AM