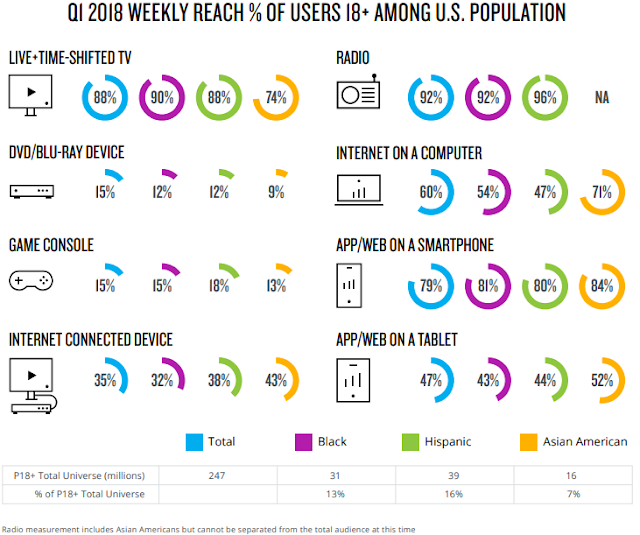 In its Q1 2018 Total Audience Report just released,  Nielsen focuses on telling the story of what’s currently happening across the media landscape for the U.S. consumer.

According to Nielsen, nine out of 10 U.S. adults (18+) use linear platforms in the average week. Live+Time-shifted TV viewing reached 88% of persons in Q1 2018, while radio had the largest reach across platforms at 92%. Radio also reaches 96% of all Hispanic adults each week. Over a third of persons use their internet connected devices (including apps on their smart TVs) during the average week, with a higher reach of 43% for Asian Americans. Computer reach is highest with Asian Americans as well, with 71% using the device weekly. Regardless of race or ethnicity, smartphones remain universally popular, reaching four out of five adults while tablets are used by less than half of all adults weekly. 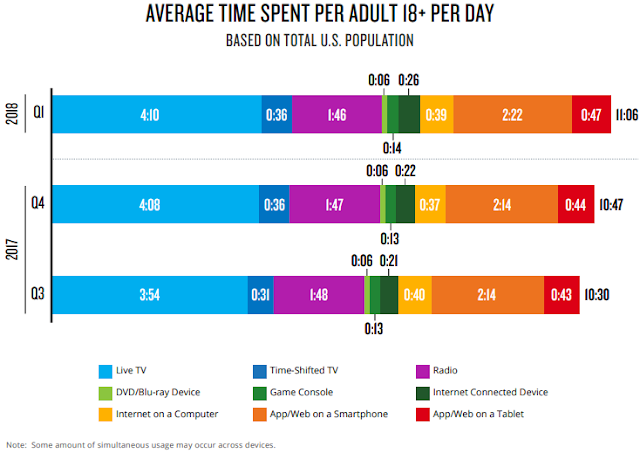 The report reveals U-S adults are spending nearly half a day—over 11 hours—listening to, watching, reading or generally interacting with media. Time spent across all media in Q1 2018 increased 19 minutes from the prior quarter. This increase in media time is driven by more time on TV-connected devices (+5 minutes) and with digital platforms (+13 minutes). Live+Time-shifted TV viewing remained relatively flat at four hours and 46 minutes a day. Note that seasonality plays a role with quarterly television usage trends, particularly as people transition from holiday breaks and the occurrence of several marquee sporting events, such as the Olympics and the Super Bowl. Radio usage wasone hour and 46 minutes in Q1 2018, trending consistently with prior quarters.

Digital usage across computer, smartphone, and tablet continue to play a growing role with the adult U-S. consumer. In Q1 2018, three hours and 48 minutes a day were spent on digital, with app/web usage on smartphone accounting for 62% of that time.

Other Highlights From Q1 2018 Report:

It’s no secret that media usage varies by demographic—not only by total time spent, but also in the distribution of time spent across media platforms. 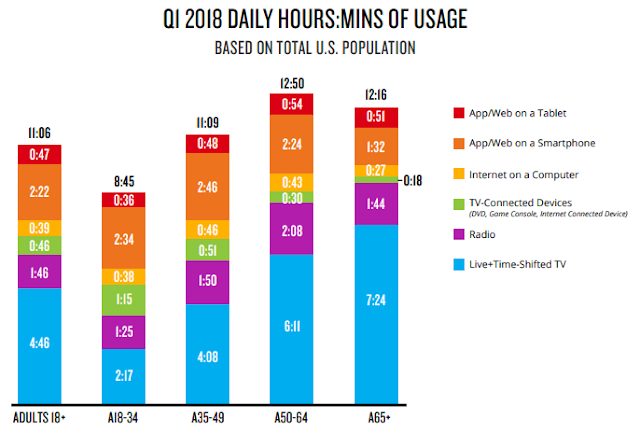 Older demos tend to lean more on traditional mediums, while younger generations are often early adopters of nascent technology. For instance, in Q1 2018, younger adults (18-34) spent less than nine hours a day as compared to older adults (50+) who spend over 12 hours a day with content across platforms. With older demos, more time is spent with linear platforms of television and radio with less time on digital platforms. 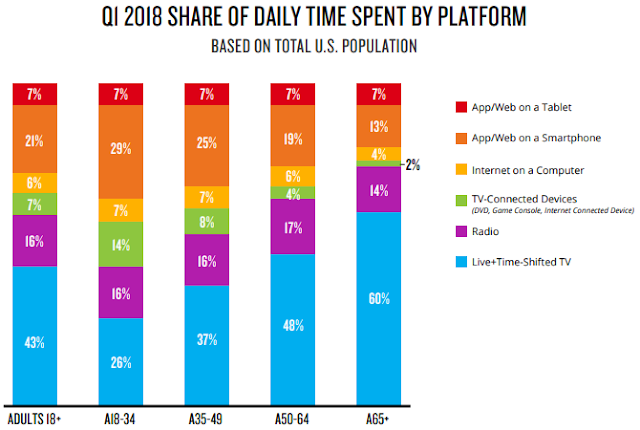 The Total audience Report also takes a look at the percent of time people spend with these platforms, and a different story begins to emerge. Regardless of age, radio consistently accounts for between 14-17% of daily media use. Adults 18-34 spend more time with digital platforms (43%) than TV and TV-connected devices (40%). Older adults spend more time on live and time-shifted content and less time on TV-connected device use and digital platforms, outside of tablet.
Posted 7:50:00 AM