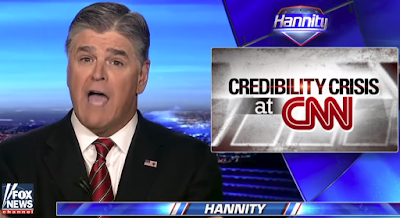 CNN’s Jim Acosta hit back at Fox News host Sean Hannity on Wednesday for saying that attendees at President Trump’s rally were right for heckling the CNN correspondent.


Hannity is a propagandist for profit, peddling lies every night. He says he’s just a talk show host, not a journalist. But he’s injecting poison into the nation’s political bloodstream warping public attitudes about the press. I’m confident in the long run the truth will prevail.
— Jim Acosta (@Acosta) August 2, 2018

According to The Hill, the White House correspondent appeared to be responding to Hannity’s comments siding with attendees at a Trump rally in Tampa, Florida, on Tuesday, who heckled Acosta.

"I’m actually going to give your network some advice, if you have an open mind and an open heart," Hannity said during the opening monologue of his show on Tuesday after the rally, addressing Acosta. "The people of this country are screaming at you for a reason. They don’t like your unfair, abusively biased treatment of the president of the United States."

"If you want to earn the respect of all Americans, not the coastal elites in California, San Francisco and New York, maybe try reporting the entire story and getting rid of the bias," Hannity continued. "Maybe examine why people are saying this to us."

Acosta, who faced boos and chants of “CNN sucks” at the rally, tweeted after the event that the response to CNN's presence was a “sad scene.”


Just a sample of the sad scene we faced at the Trump rally in Tampa. I’m very worried that the hostility whipped up by Trump and some in conservative media will result in somebody getting hurt. We should not treat our fellow Americans this way. The press is not the enemy. pic.twitter.com/IhSRw5Ui3R
— Jim Acosta (@Acosta) August 1, 2018


Tom's Take: It's Acosta who continues to insist he's non-partisan and objective.