Outside Counsel To Investigate Moonves Allegations 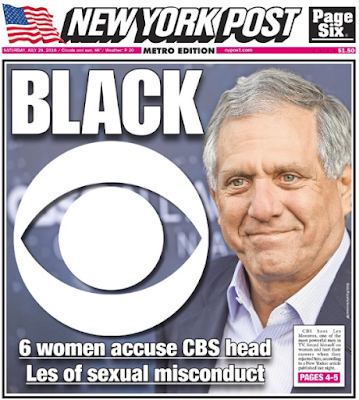 UPDATE 7/30 4:00 PM:  CBS Corporation announced today that its Board of Directors is in the process of selecting outside counsel to conduct an independent investigation. No other action was taken on this matter at today’s board meeting.


CBS’s board of directors is expected to take up the allegations of sexual misconduct against Chairman and CEO Leslie Moonves Monday, at its regularly scheduled meeting, Deadline is reporting.

It is unclear whether the media company’s controlling shareholder, Shari Redstone, will attend the meeting in person. The two have been locked in an acrimonious legal battle over CBS’s efforts to limit the Redstone family’s grip over the company.

Meanwhile, a representative for CBS controlling shareholder Redstone has weighed in on plans for CBS to investigate sexual misconduct claims against chairman-CEO Leslie Moonves, defending Redstone against rumors that she has helped fuel the reporting on Moonves’ behavior to gain favor in the legal battle for control of the company.

“The malicious insinuation that Ms. Redstone is somehow behind the allegations of inappropriate personal behavior by Mr. Moonves or today’s reports is false and self-serving,” Redstone spokeswoman Sara Evans said. “Ms. Redstone hopes that the investigation of these allegations is thorough, open and transparent.”

According to Variety, the 11 independent members of CBS board are in the process of hiring a law firm to handle the probe. Redstone is vice chair of the CBS Corp. board, and she hold same role at Viacom. Redstone and two other CBS board members, Robert Klieger and David Andelman, are considered non-independent because of their ties to her National Amusements holding company, which owns nearly 80% of the voting shares in CBS and in Viacom.

Redstone and Moonves are at odds over the future direction of CBS. The conflict became so great earlier this year that CBS filed suit against National Amusements, accusing Redstone of breaching her fiduciary duty to CBS shareholders. The trial is set for October in Delaware, although there has been much speculation about the sides reaching a settlement before then. The pressure on Moonves created by the sexual misconduct allegations adds another layer of complexity to the corporate battle.

According to rapidtvnews.com, Redstone, daughter of retired Viacom mogul Sumner Redstone, wants CBS and sister media company Viacom to merge – a move that Moonves and the CBS board of directors have had reservations about. Both companies are under the umbrella of Redstone’s National Amusements.

Viacom has made it no secret that it wants Moonves at the helm of a combined company, but the talks between the two have hit an impasse regarding the line of succession.

Moonves wants CBS COO Joseph Ianniello to be president and COO of the merged entity, and to succeed him as CEO when he retires. The Redstone family instead wants Viacom CEO Bob Bakish to be the No 2 and succeed Moonves when the time comes. Sources told Reuters that Redstone has offered to drop demands for Bakish to have a role beyond being on the combined company’s board.

“[CBS CEO] Moonves said that he did not think he could successfully lead the Company under these circumstances,” a lawsuit filed earlier this year said. “He said that the soul of CBS and its success derived from the independence of its Board and management. He concluded that his duty to all stockholders led him to believe the Stock Dividend was necessary.”

Moonves' future at the company is in doubt, according to Fox Business citing people with knowledge of the situation.

The former top CBS executive, who is both familiar with the company's board and knows Moonves, told Fox Business that directors are facing what could be their worst crisis in years, since Moonves is critical to CBS’s future, including the plans to possibly sell the network once the imbroglio with Redstone is over.

“The board is f--cked,” this former executive said. “You don't know what's in his contract. It may be hard just to get rid of him because these are older allegations. Plus, there isn’t a decent successor to him at CBS. And who knows how much they would have to pay him to leave.”
Posted 4:10:00 PM