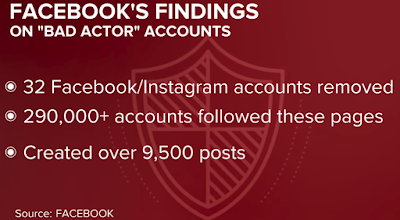 Facebook announced on Tuesday that it had detected a coordinated influence operation whose activities appeared to target divisive political issues ahead of the 2018 midterm elections.

According to CBS News, the company identified the activity roughly two weeks ago as part of an ongoing investigation into election interference, its representatives said, and had removed eight Pages and 17 profiles from Facebook and seven accounts from Instagram that had been created between March 2017 and last May. Taken together, the accounts and Pages created more than 9,500 posts, and more than 290,000 accounts had followed at least one of the pages, Facebook said. The pages ran ads 150 ads for $11,000 that were paid for in U.S. and Canadian dollars.

Though the activity was not overtly linked to Russia, it was reminiscent of operations conducted by Russian accounts during the 2016 presidential election, Facebook said.

"We're still in the very early stages of our investigation and don't have all the facts — including who may be behind this," Nathaniel Gleicher, Facebook's head of Cybersecurity Policy, wrote in a public post. "It's clear that whoever set up these accounts went to much greater lengths to obscure their true identities than the Russian-based Internet Research Agency (IRA) has in the past."
Posted 3:12:00 AM