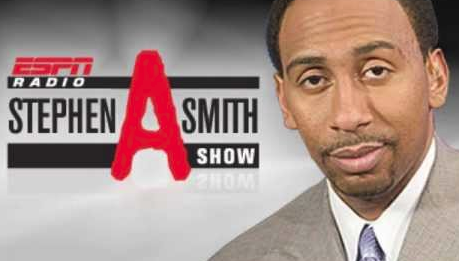 Beginning Monday, August 13, at 1 p.m. ET, ESPN Radio’s weekday The Stephen A. Smith Show will join Golic and Wingo, The Dan Le Batard Show with Stugotz and The Will Cain Show on ESPNEWS, making the network the TV home of all four of ESPN’s weekday national radio simulcasts.

The two-hour ESPN Radio show hosted by Smith, who also appears on First Take with Max Kellerman and moderator Molly Qerim on ESPN 10 a.m. – noon, debuted on the national ESPN Radio network in January.  Before that, it had been heard on SiriusXM channel 80 and ESPN’s owned and operated stations in New York (98.7FM) and Los Angeles (710AM).

"With each passing month, the radio show continues to progress, to move on up, adding elements and components that will only contribute to our success,” Smith said. “Simulcasting this show is yet another step in that direction, for myself, my team and, most importantly, for ESPN. As usual, now it's time to get to work......and make it work......which we know I intend to do. Buckle Up!"