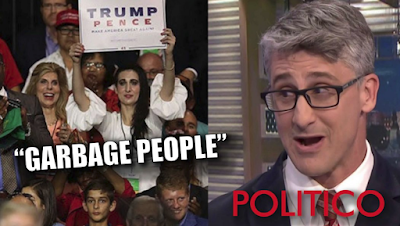 After watching a video of President Trump's supporters yelling, cursing and flipping their middle fingers at the media during a rally in Tampa this week, a Politico reporter weighed in, unleashing no-holds-barred tweets that described the screaming crowd as toothless “garbage people.”

According to The Washington Post, the tweets from Marc Caputo, who covers Florida politics for Politico, fueled criticism from conservatives, who said his mockery of the president's supporters validates their hatred of the media. The following day, Caputo deleted his tweets and apologized, saying he should not have stirred further anger and division in an already deeply polarized political landscape.

“Hate begets hate,” Caputo tweeted Wednesday, clarifying that he was not mocking a broad swath of Trump supporters but only those screaming at the media at the Tampa rally. “But the fault is mine for causing confusion and feeding anger. In the age of social media, where divisiveness serves no decent purpose, these flippant comments on my part only made things worse and contributed to a cycle of rage that I should not have inflamed further. So I'm sorry.”


While it’s usually a good idea to just delete tweets that are wrong, I own this and the criticism (both accurate and misleading) that has followed. I'll do better. Here they are: 3/3 pic.twitter.com/G2rZrHjYWb
— Marc Caputo (@MarcACaputo) August 1, 2018