Richmond Radio: Gene Brady OUT At WKLR After FB Post 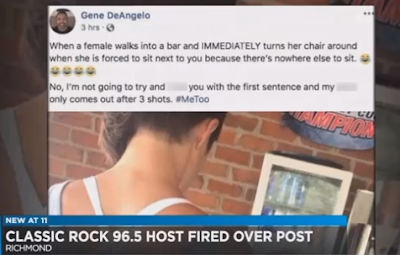 Summit Media fired the host of Classic Rock WKLR 96.5's "Brady in the Morning," after the post surfaced on his personal Facebook page, reports NBC-TV12.

In a since-deleted post, Gene Brady made an offensive comment about a woman who sat next to him in a bar, tagging the #MeToo movement at the end of his post.

Though Brady claimed it was a joke, others on social media didn't find it very funny. The post eventually caught the attention of WKLR Classic Rock 96.5. The radio station came out with a statement apologizing to its listeners, saying in part:

One of our employees violated our trust and made some statements online that do not reflect our values as a company. Because of this we are conducting an internal investigation and will come up with a response that addresses the situation appropriately.

Despite apologizing for the post, Brady announced on his Facebook page that Thursday was his last day with Classic Rock 96.5. He said he made a joke that others thought was offensive and that it became more of an issue than it should have become.


Classic rock 96.5 is all about the music. We love all our listeners and feel that everyone should be treated with respect at all times. Recently one of our employees violated our trust and made some statements... https://t.co/USl3vd2OPp
— Classic Rock 96.5 (@classicrock965) August 2, 2018

Brady had been with Summit Media for nearly five years.
Posted 3:18:00 AM