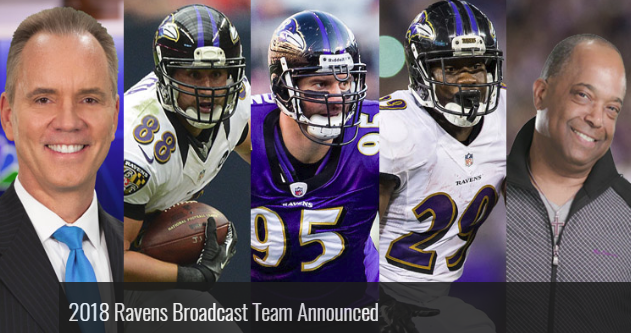 Dennis Pitta, Jarret Johnson and Justin Forsett will return for a second season, WIYY 98 Rock and NewsRadio WBAL 1090 have announced.

The three players split up calling last season’s games and all did well, bringing their unique perspective and insider information to the airwaves. This year, they’ll come together.

Pitta and Johnson will join in the booth with Ravens Play-by-Play Announcer Gerry Sandusky, who begins his 12th year as the voice of the Ravens providing color and analysis throughout the season.

Forsett will report from the sideline for all Ravens road games. Kirk McEwen, 98 Rock’s Afternoon Personality, will be the sideline reporter for Ravens home games. Long-time Ravens broadcaster Stan White will offer analysis and insight before and after each Ravens game all season.

Cary L. Pahigian, President and General Manager of WBAL Radio and 98 Rock, said, “Gerry Sandusky is among the NFL’s best play-by-play announcers and is teamed up with an All-Pro lineup of analysts and sideline reporters. Gerry, Dennis, Jarret, Stan, Justin and Kirk will provide our listeners with an exceptional Ravens game day experience.”

Ravens Senior VP of Corporate Sales and Business Development Kevin Rochlitz added, “This trio of former Ravens did an outstanding job from the broadcast booth last season. Their enthusiasm for the game and wealth of football knowledge was evident, and they complimented Gerry Sandusky exceptionally well. We look forward to hearing their insight again in what we believe will be an exciting year of Ravens football.”
Posted 3:10:00 AM