Smart Speakers Getting Radio Back Into Homes 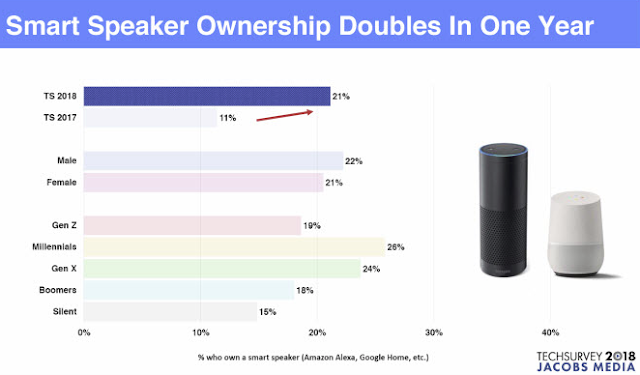 With smart speaker adoption quickly increasing in American homes, radio is on the verge of capitalizing on an vital listening location.

That's was the main message from Thursday's webinar on smart speakers from Jacob's Media and gM Paul Jacobs.  “In-home radio listening is still really important and if there aren’t radios in the home, how are they going to listen,” was the question posed by Jacobs.

The webainer cited stats from TechSurvey 2018, an online survey of 64,000 radio station database members, that showed that 83% of respondents have a regular radio in working condition where they live that they use, down from 88% in 2017 and 89% in 2016. Just two thirds of Millennials have a working radio at home.

Among formats, sports radio listeners lead the way with 29% owning a smart speaker, followed by CHR (25%) and a three-way tie for third among hot AC, country and adult alternative (each at 24%). Formats that under-perform the 21% average in smart speaker ownership are the same ones more apt to have a working radio in the home: urban AC (15%), classic hits (17%) and variety hits (18%).