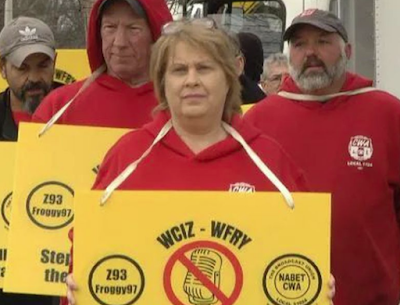 Stephens Media Group has filed an unfair labor practice charge against the union representing employees at radio stations in Watertown and Massena.

The company filed the charge, saying NABET (National Association of Broadcast Employees and Technicians) is refusing to bargain collectively with SMG.

“The previous, collective bargaining agreements expired almost two years ago. Yet, the union refuses to bargain in good faith to reach new agreements,” said SMG owner David Stephens in a news release. “We had no choice but to file these charges.”

NABET General Counsel Judi Chartier said the union has yet to see the charge, but has read the news release.

She told 7 News that the union will be happy to sit down with Stephens Media Group as soon as it rehires the employees SMG laid off in 2018.

The unfair labor practice charge comes less than a month after an administrative law judge with the National Labor Relations Board directed Stephens to rehire an employee it fired in Massena, and to reinstate, with back pay, full-time employees it laid off in Watertown.

Stephens told 7 News last month that his company plans to appeal some of the findings in the judge’s decision.

SMG claims it and the union are at an impasse; the judge ruled they are not.

“To remain competitive, SMG needs the ability to program the stations as it sees fit. Talent, and not seniority, should determine who gets to be heard on the air. The union refuses to negotiate this point with SMG. Their failure to negotiate is a violation of the law and proof we are at impasse,” Stephens said in the news release.

The news release said the NLRB is expected to rule on the matter within the next few months.
Posted 10:09:00 AM