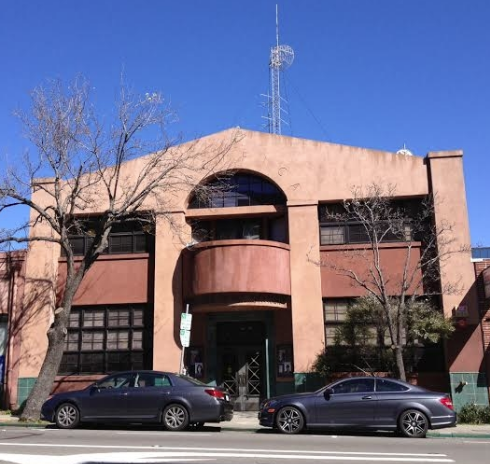 KPFA 94.1 FM's iconic building in Berkeley CA is scheduled to be auctioned off March 20 because of the non-payment of taxes, Berkeleyside.com reports.

The progressive radio station has not paid property taxes since December 2013, and currently owes $486,751 to Alameda County. The Tax Assessor’s office has a contract to sell off delinquent properties. The public auction starts March 20. The minimum bid is $486,853.

The station has until March 19 to pay the debt to stop the auction.

“We’re all freaking out about it,” said Christina Huggins, the chair of the KPFA local station board. “We’re all worried about it. It’s alarming.”

She and others believe that the Pacifica Foundation has hired a Southern California law firm, Alpert Barr & Grant, to negotiate a settlement with the Alameda County Tax Collector.

Huggins and others say the reason KPFA has not been paying its property taxes stems from the time the Pacifica Foundation legally changed its name but neglected to register the new name with California’s Board of Equalization, which oversees nonprofits.

It is not clear if there is enough money in Pacifica’s coffers to pay off the $486,751 property tax bill. The foundation has been on financially shaky grounds for a few years.

In 2018, the Pacifica Foundation was $8 million in debt, according to a statement by the then-executive director. A huge chunk of that debt came from WBAI in New York City, which had been unable to pay rent for its transmitter on top of the Empire State Building. In 2016, the landlord, Empire State Realty Trust, had sued Pacifica for $1.3 million in back rent. A New York Supreme Court judge ruled in favor of ESRT in 2017, awarding the company a judgment of more than $1.8 million.

Help arrived in 2018 when the nonprofit lender FJC agreed to lend Pacifica $3.4 million to pay off ESRT. The terms freed the foundation from making any payments for 18 months and allowed it to pay interest only for the next 18 months. The loan must be paid off in 2021.
Posted 1:32:00 AM