MSNBC's Joe Scarborough said "the media silence is deafening" regarding criticism of the rapper Snoop Dogg over his own comments about CBS News anchor Gayle King for an interview that broached the Kobe Bryant rape case. 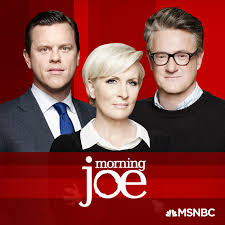 The Hill reports the rapper, whose legal name is Calvin Cordozar Broadus Jr., posted an Instagram video that said "we expect more from you Gayle. Respect the family and back off, bitch, before we come get you."

“The media silence is deafening,” the "Morning Joe" host said on his show Monday, referring to those comments. "People like Katy Perry, worked with Snoop in the past. People like our dear friend Martha Stewart, who’s working with him now.”

“It’s time for people to speak out," he said. "Again, let’s just keep this very simple, because it is very simple. A black female journalist asked a tough question, in the middle of a wide-ranging interview, and because of that her life was threatened. ‘We’re coming to get you’ from a man, it must be remembered, who was arrested for murder,” Scarborough added.

Snoop Dogg was charged with the first- and second-degree murder of Philip Woldemariam in 1993. The rapper and his bodyguard were eventually acquitted in early 1996.

The rapper on Saturday sought to clarify his remarks, stating that he wasn't threatening King but felt she was disrespectful to the Bryant family by bringing up the 2003 rape charges against Bryant in an interview with the former WNBA star Lisa Leslie.

Bryant was accused in 2003 of sexually assaulting a Colorado hotel employee. The charges were later dropped after the employee declined to cooperate with prosecutors. She would eventually settle with Bryant outside of court, and Bryant acknowledged in an apology that the woman did not feel that their encounter was consensual.
Posted 1:27:00 AM