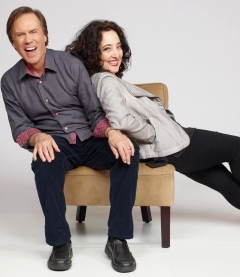 The Bob & Sheri Show is ending on its longtime flagship station WLNK 107.9 FM in Charlotte.
Urban One, which acquired WLNK in November in a multi-station swap with Entercom will stop airing the show on Friday, April 30, reports The Charlotte Observer.  However, the morning show will continue in syndication and currently boasts 70 affiliates.

Bob Lacey and Sheri Lynch have issued the following statement:

“After 29 years on WLNK, we understand that Radio One is going in a different direction. We came to an agreement with the management at WLNK to stay on till the end of the month, and we will. We are actively looking for a new Radio home in Charlotte.  We love our listeners  across America and around the world. Charlotte is home and will always be  special. We want our fans to know they can continue to listen to us via our daily podcast, our off-air Oddcast, as well as streaming 24/7 at bobandsheri.com.”

Tony Garcia, who together with Lacey and Lynch owns NOW! Media, the company that syndicates Bob & Sheri, stated:

“Charlotte is home for Bob & Sheri and WLNK was the springboard for their amazing success story. As we talk with broadcasters in the Charlotte Radio market, who want to connect with Women in a relevant and unique way, we will continue to serve AC, Classic Hits and Hot AC affiliates in 70 markets, engaging their listeners on-air, online and via Social Media.”

The Observer reports the 71-year-old Bob Lacey and 55-year-old Sheri Lynch are not employees of WLNK. In 2017, the duo started a company called Media Now and took independent ownership of the show.

Although the show is promoted as female-slanted, it has gained a share of male listeners as well, developing a loyal nationwide following. Bob and Sheri openly share their quirks and personal lives with listeners, creating an atmosphere. The program is structured as a traditional morning show rather than a morning zoo, and the show has no comedic bits

After 10 years hosting "PM Magazine" on WBTV, Bob Lacey returned to Charlotte morning radio in December 1989 on what was then WBCY. By the time Lacey persuaded his company to hire WBTV marketing employee Sheri Lynch to join him, the station was WBT-FM "Sunny 107.9." Local management did not like the idea of "Bob and Sheri," so Lacey contacted the Atlanta headquarters of Jefferson-Pilot Communications, and he put up $10,000 of his own money in case the show did not work. He never had to give up the money; The company hired new managers who supported Bob and Sheri.

In early 1996, Bob and Sheri were number two in the morning—behind John Boy and Billy—among listeners 25 to 54. In order to keep the duo in Charlotte but still pay them as if they worked in the big city, Sunny 107.9 began working toward syndicating the show, and landed their first affiliate on WCTW in Hudson, New York in July of that year.  The content would allow the show to work in other parts of the country, and it would not matter that they weren't local.

According to the Observer, besides dropping Bob & Sheri, Urban One also has new plans for WLNK's Matt & Ramona in PM Drive.