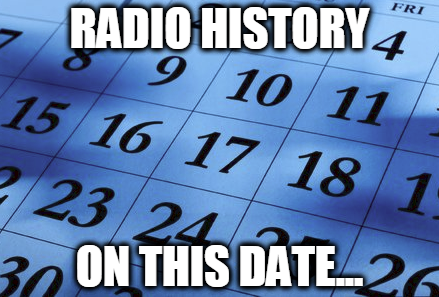 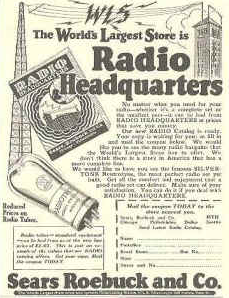 A Chicago radio manufacturer signed on WENR Radio in 1925. The station entered a time-sharing agreement with WBCN Radio.  An investor bought both stations in 1927. He later sold the licenses to NBC.  The network kept WENR on the air.  It shared a frequency with WLS for decades.  One station would sign off and another would sign on.

WENR-WLS boosted power to 50,000 watts in 1932, beaming its programming over much of the nation.  Despite its part-time status, the station built a large amount of goodwill and a huge audience. 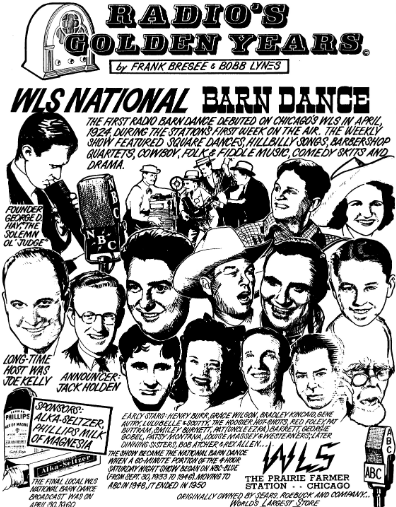 Your Hit Parade aired from 1935 to 1953 on radio, and seen from 1950 to 1959 on television. It was sponsored by American Tobacco's Lucky Strike cigarettes. During this 24-year run, the show had 19 orchestra leaders and 52 singers or groups. Many listeners and viewers casually referred to the show with the incorrect title The Hit Parade.

Each Saturday evening, the program offered the most popular and bestselling songs of the week. The earliest format involved a presentation of the top 15 songs. Later, a countdown with fanfares led to the top three finalists, with the number one song for the finale. Occasional performances of standards and other favorite songs from the past were known as "Lucky Strike Extras."

Listeners were informed that the "Your Hit Parade survey checks the best sellers on sheet music and phonograph records, the songs most heard on the air and most played on the automatic coin machines, an accurate, authentic tabulation of America's taste in popular music." However, the exact procedure of this "authentic tabulation" remained a secret.

The origins of the format can be traced back to the Lucky Strike Dance Orchestra (aka Lucky Strike Orchestra), which aired from 1928 to 1931, sponsored by Lucky Strike cigarettes. Led by Benjamin A. Rolfe the show was heard on the NBC Red network for an hour at 10 p.m. on Saturdays (with Tuesday and Thursday broadcasts beginning around September 16 and 18, 1930, respectively).

➦In 1941...An radio show with the name Life of Riley was a summer replacement show heard on CBS from April 12, 1941, to September 6, 1941. The CBS program starred Lionel Stander as J. Riley Farnsworth and had no real connection with the more famous series that followed a few years later.

The show is not to be confused with The Life of Riley, another radio situation comedy series of the 1940s that was adapted into a 1949 feature film, a 1950s television series, and a 1958 comic book.

➦In 1945...President Franklin Delano Roosevelt died from a massive cerebral hemorrhage at age 63 (Born - January 30, 1882).  Often referred to by his initials FDR, he served as the 32nd president of the United States from 1933 until his death in 1945. A Democrat, he won a record four presidential elections and became a central figure in world events during the first half of the 20th century.

Roosevelt directed the federal government during most of the Great Depression, implementing his New Deal domestic agenda in response to the worst economic crisis in U.S. history. As a dominant leader of his party, he built the New Deal Coalition, which realigned American politics into the Fifth Party System and defined American liberalism throughout the middle third of the 20th century. His third and fourth terms were dominated by World War II. Roosevelt is widely considered to be one of the most important figures in American history, as well as among the most influential figures of the 20th century. 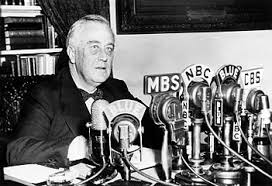 Roosevelt believed that his administration's success depended upon a favorable dialogue with the electorate — possible only through methods of mass communication — and that this would allow him to take the initiative. The use of radio for direct appeals was perhaps the most important of FDR's innovations in political communication. Roosevelt's opponents had control of most newspapers in the 1930s and press reports were under their control and involved their editorial commentary. Historian Betty Houchin Winfield says, "He and his advisers worried that newspapers' biases would affect the news columns and rightly so." Historian Douglas B. Craig says that he "offered voters a chance to receive information unadulterated by newspaper proprietors' bias" through the new medium of radio.

➦In 1954…A year earlier...Bill Haley scored his first national success with an original song called "Crazy Man, Crazy," a phrase Haley said he heard from his teenage audience, again released on Essex. "Crazy Man, Crazy" was the first rock and roll song to be televised nationally when it was used on the soundtrack for a 1953 television show starring James Dean.

In the spring of 1954, Haley and His Comets left Essex for New York-based Decca Records, where they were placed under the auspices of veteran producer Milt Gabler. Their first session, on April 12, 1954, yielded "Rock Around the Clock," which would become Haley's biggest hit and one of the most important records in rock and roll history.  Most music historians agree that the song, featured in the 1955 film "Blackboard Jungle," ushered in the rock 'n' roll era. It hit #1 on June 29, 1955 and stayed there for eight weeks, remaining on the charts for a total of 24 weeks, and has sold more than 25 million copies.

"Shake, Rattle and Roll" followed. it never achieved the same level of historical importance as "Rock Around the Clock" but it predated it as the first international rock and roll hit. It did not attain the Number 1 position on the American charts, but it became Haley's first gold record.

➦In 2007...Don Imus was fired from his syndicated program by CBS Radio after a week of controversy brought on by racial remarks broadcast a week earlier about the Rutgers women basketball team.

Carey was on the original announcing staff of WCEN, Mt. Pleasant when it went on the air August 8, 1949. After completing his college degree in June 1950, Carey returned to WCEN. In 1949, he was part of the first broadcast ever made of a Central Michigan University football game. After returning from serving in the Army in October 1952, he resumed his announcing and sportscasting duties at WCEN. In April 1953, Carey moved to WKNX in Saginaw, Michigan to become the afternoon disc-jockey. He also worked on WKNX-TV and did the first on-camera commercial for that station. During his stay at WKNX, Carey was program director of radio for two years. In June 1956, Carey joined the announcing staff at WJR in Detroit, Michigan and worked there until his retirement in January 1992.

After producing the Detroit Tigers Radio Network from 1964 to 1971, Carey joined Ernie Harwell as a play-by-play announcer for the team in 1973 and spent nineteen seasons calling the games until his retirement after the 1991 season. For sixteen of those years calling Tiger baseball on radio, he also handled the engineering for the broadcasts.