The Rundown: CDC Warns Next Wave Could Be Worse As the number of U.S. deaths from the coronavirus passed 45,000 on Tuesday, according to the count from Johns Hopkins University, the director of the Centers for Disease Control and Prevention warned there could be a second outbreak of the disease in the country this winter, which could be made worse because it will coincide with flu season. Director Robert Redfield said in a Washington Post interview published yesterday that could overwhelm hospitals and doctors' offices, which are already strained during a bad flu season. He called for states to spend the next few months readying for the next phase by continuing to observe social distancing, scaling up testing and contact tracing, and emphasizing the importance of getting flu shots.

The day after President Trump posted a late-night tweet saying he'd sign an executive order temporarily suspending immigration to the U.S. due to the pandemic and the economic fallout, Trump on Tuesday announced a 60-day suspension of issuing green cards, which grant permanent residency, with the goal of limiting competition for jobs. He said there would be exemptions but didn't name them, saying the order was still being written. The order doesn't affect those who come to the U.S. as temporary workers on non-immigrant visas. 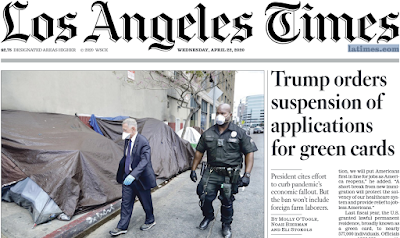 Attorney General Bill Barr said yesterday that the Justice Department may take legal action against governors over strict restrictions like stay-at-home orders and business shutdowns imposed because of the coronavirus pandemic that infringe on constitutional rights if they continue even after the crisis improves in their states. Barr said on Salem Media'sThe Hugh Hewitt Show that such measures are justified up to a point, but states should eventually move to more targeted measures. He said, "We’re looking carefully at a number of these rules that are being put into place, and if we think one goes too far, we initially try to jawbone the governors into rolling them back or adjusting them. And if they’re not and people bring lawsuits, we file statement of interest and side with the plaintiffs."

In other developments:
➤CONGRESS, WHITE HOUSE REACH AGREEMENT ON AID DEAL: Congress and the White House reached agreement on a $483 billion coronavirus aid deal yesterday after nearly two weeks of negotiations. It was quickly approved by the Senate and sent to the House, with votes set for Thursday. The package provides $331 million more for the Payment Protection Program, a loan program for small businesses amid the pandemic that ran out of its initial money last week. An additional $75 billion will go to hospitals struggling under the burden of coronavirus cases, and $25 billion to increase testing for the virus. The last two measures were pushed for inclusion by Democrats, but they did not get included the extra funding they wanted for state and local governments whose budgets have been decimated amid the pandemic. Trump said he was open to including that in a subsequent aid package.

Meanwhile, amid complaints about money from the Paycheck Protection Program going to larger companies than the small businesses it was intended for, the Associated Press reported Tuesday that least 75 companies that got aid are publicly traded, and some have market values "well over $100 million."

➤TRUMP SAYS DOESN'T KNOW IF KIM JONG UN IS SICK, WISHES HIM WELL: The day after a CNN report that the U.S. is monitoring intelligence that suggests Kim Jong Un may be in grave danger after undergoing surgery, President Trump said Tuesday (April 21st) that he doesn't know if the North Korean leader is ill. He told reporters: "I can only say this, I wish him well. Good luck." Asked whether he'd try to contact Kim, Trump said, "I may. I just hope he's doing fine." The South Korean government has said no unusual activity has been detected in North Korea and stated, "We have no information to confirm regarding rumors about Chairman Kim Jong Un’s health issue that have been reported by some media outlets."

➤NATIONAL SPELLING BEE CANCELED: This year's Scripps National Spelling Bee is being canceled because of the coronavirus pandemic. It had been announced last month that the spelling bee wouldn't be held as scheduled the week of May 24th at its usual location outside Washington, D.C., but Scripps said yesterday that they'd determined there's, quote, "no clear path to safely set a new date" this year. They also said a virtual spelling bee would be too difficult logistically and wouldn't be true to the spirit of the competition. The Scripps National Spelling Nee, which began in 1925, was last canceled from 1943 to 1945 because of World War Two.
Posted 4:29:00 AM