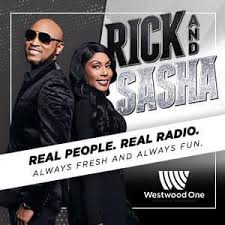 CUMULUS MEDIA’s Westwood One announced Thursday Rick and Sasha, the fastest-growing Urban AC morning show, has launched on WNBM 103.9 FM in New York City and has expanded to 30 plus markets.

“The Rick and Sasha show is growing fast and going BIG! New York is going to LOVE this show!” said Kenny Smoov, Vice President of Urban Programming, Cumulus Media. “There is nothing like getting a historic first-year report card. Rick and Sasha, with George Willborn, not only sounds better than it ever has but is also showing remarkable ratings growth - extraordinary for a second-year show. It is refreshing when the actual numbers match my ear test. This show is poised for long-term greatness.”

Rick and Sasha is available via satellite receiver, web or FTP automated download. For more information on Rick & Sasha, contact Todd Alan at (212) 735-1107 or talan@westwoodone.com or Gary Bernstein at (508) 245-1776 or gary@oceanictradewinds.com
Posted 1:38:00 AM